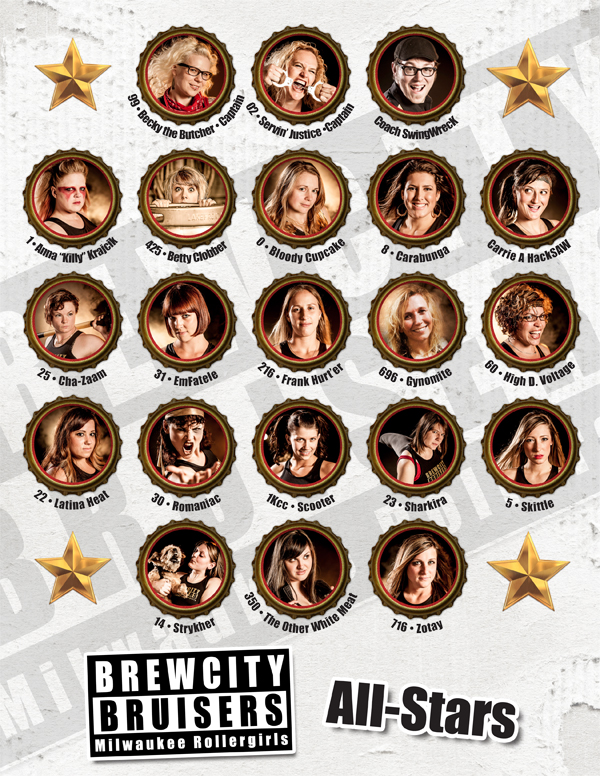 Based In: Milwaukee, Wisconsin

Who should we watch out for on the track during your appearance at the 2012 Playoffs and why?
It’ll be a surprise who the weekend shiners will be! Don’t let the sparkling gold blind you!

Have there been any notable roster changes since your last Playoffs appearance?
We have one first-year rookie on the team, Chazaam, and also a 5-year veteran Bruiser making her All Star Team debut on the team, The Other White Meat. In addition we have Gynomite, a recent transfer from the Paper Valley Roller Girls, on our team. Sadly, in the last few weeks we lost one of our most valuable skaters, Moby Nipps, to the Windy City Rollers. She made the move in early September, and we certainly wish her and the WCR girls well.

What's one super special thing about your league that makes skaters stay with your league?
BCB takes pride in our league-first attitude. We all play for one of four home teams, but we know we are all Brewcity Brusiers first. We’ve had so many transfers come to us and compliment us on how well organized and dedicated we are to our league’s future. Keeping the entire league on the same path, and not divided by home team rivalries, makes for happy and returning members. We also are proud to embrace skaters of all levels, and have recently added a junior league (The Brewcity Micro Brews) and a rec league (Brewcity Lite Brews) to our organization.

What's the All Stars’ most memorable derby moment?
Perhaps our most memorable experience would be in 2009 at the Brawl of America regional tournament when we upset the Burning River Rollergirls in an overtime jam. It was our first trip to Playoffs, and to leave with that substantial win felt great.

Who's the All Stars’ biggest rival?
Our biggest rival is probably Mad Rollin' Dolls. They’ve been “big sisters” to us since we formed, only two years after they did. And, because of our close proximity, we’ve played them just about every season we had an all-star team … and haven’t won a bout yet! BCB definitely gets wrapped up in a mental block when it comes to the Dairyland Dolls, kicking our own selves in the asses with ridiculous penalties and mistakes. Hopefully one of these days we can get past that. Beer outranks milk, right?