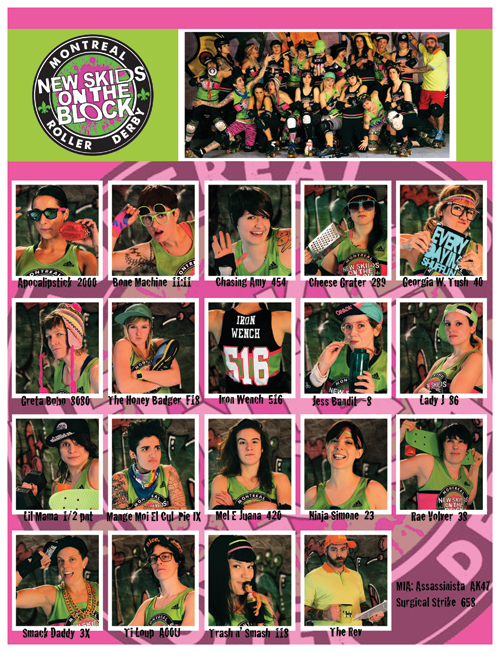 What are some game highlights from your 2012 travel team season?
We started out the season without our entire jammer bench from last season. Iron Wench was living abroad, Georgia W Tush was injured, and Ewan Wotarmy retired. This forced us to expand and to become a much more well-rounded team. Some new skaters stepped up, and some vets picked up the star again, and we managed to come within 40 points of Minnesota RollerGirls and 30 points of Kansas City Roller Warriors, which was pretty much a kick-ass start for us. Then, the cherry on top was in June, when we beat two regional rivals for the first time, Steel City Derby Demons and Charm City Roller Girls. We reached our highest ranking in the region ever, third! We were the first non-USA team to reach Playoffs, and we would like to be the first to reach Championships.

Who's the Skids’ biggest rival?
We get a great rival right off the bat, London Rollergirls. At last year's Playoffs, the fifth place bout opposed Montreal and London and was voted DNN's bout of the year. It ended in a last jam thriller, London taking it 137-135. That's not about to happen again.

Who should we watch out for on the track during your appearance at the 2012 Playoffs, and why?
We will finally be playing with our full starting line up! Iron Wench is back from Switzerland, Smack Daddy should be fully healed and functional, and Georgia W Tush's collar bone is all glued up. However, this forced us to get creative, especially with the jammer bench, and resulted in our widest selection ever! All hail the new Skids jammer generation, Apocalipstick, Ti-Loup, Greta Bobo, and The Honey Badger.

What's one super special thing about Montreal Roller Derby that makes skaters stay with your league?
Our overall fabulosity.

What's your crowd like at home?
Rowdy and terrific! Pabst also helps out a great deal. We usually sell out the St-Louis arena, conveniently located in the sassy Mile-End borough, approximately 1000 seats.