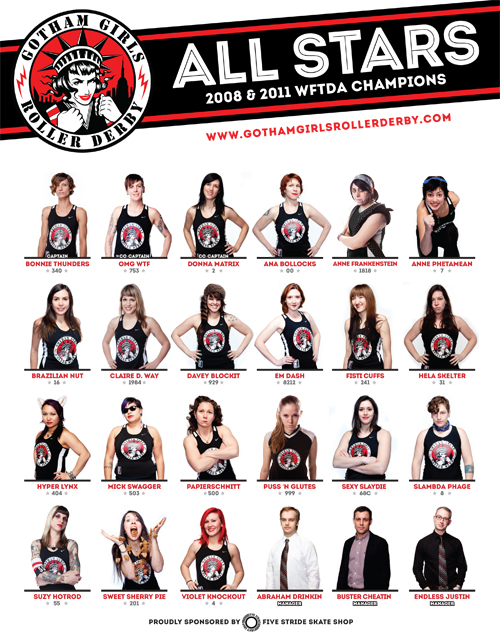 Based In: New York, New York

Have there been any notable roster changes since your last Playoffs appearance?
We lost long time All Star Kandy Kakes and rising star B Zerk to retirement. In addition we lost Brigitte Barhot, now skating with the Wine Country Rollers, Luna Impact, and Splint Her. Wild Cherri, one of our core jammers, transferred to Atlanta. On the flip side we picked up Claire D Way from Boston, Mick Swagger from Rose City, and Violet Knockout from Long Island Roller Rebels.

Who should we watch out for on the track during your appearance at the 2012 Playoffs, and why?
Our team as a whole is one big superpower, but in particular you should watch out for OMG WTF who is always up front waiting to recycle jammers back into the pack, Slambda Phage who's playing her first year in roller derby and already jamming for the All Stars, and Mick Swagger who has been an awesome addition in our packs.

What's your crowd like at home?
We get about 1,000 fans [at our bouts]. Our crowd is very home team centric because our home teams are named after the NYC boroughs. Fans really latch onto this and have pride in the borough they live in.

What are some game highlights from the All Stars’ season?
Rose City at ECDX. We’ve played them the past two years at ECDX and it’s always a close and exciting battle.

What's the All Stars’ most memorable derby moment?
Winning the 2011 WFTDA Championships making us the only team to ever win two times [also in 2008]. Or losing to Rocky Mountain Rollergirls in the semifinals of the 2010 WFTDA Championships. That loss fired us up to come back with a vengeance the next year.