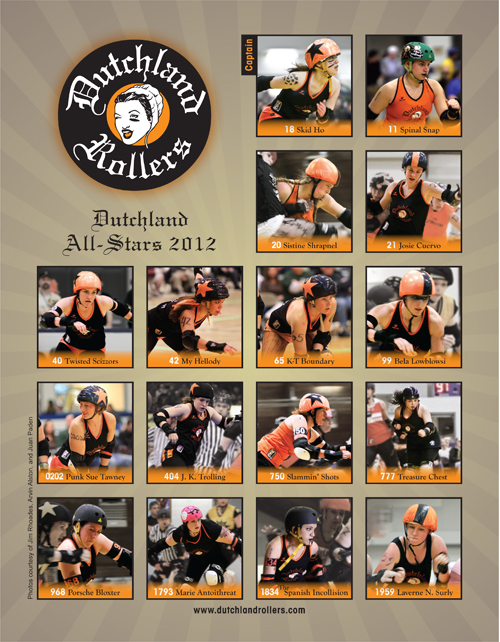 Based In: Lancaster, Pennsylvania

Have there been any notable roster changes since your last Playoffs appearance?
This is probably the most different All-Star roster for Dutchland in a long time. V-Diva, who skated with Dutchland during the tournament last year, transferred to Philly Roller Girls. A number of longtime vets decided to hang up their skates for good this summer, including Milk Maiden, Renegade Raven, Nash Villain, Sukkubus Strixe, White Thrash, Rum N. Choke, and Hillbilly Hellcat. Many had been skating for 5 or 6 years, which is not uncommon for the length of a derby career. Merv the Perv, Dutchland's coach for the last 3 years, has also retired. Rum and Hillbilly are still active in a coaching capacity, but we will miss or retirees dearly, on and off the track, and we hope they are watching!

Who should we watch out for on the track during your appearance at the 2012 Playoffs, and why?
Skid Ho, team captain, is always a skater to watch. She missed the Detroit Derby Girls game due to a stress fracture in her foot, and is still recovering, but Skid is really the heart of the team this year. Bela Lowblowsi is an incredibly talented and fierce blocker, and is probably one of the more underrated skaters in the East. Treasure Chest is not only a founding member of the league, she’s also unmovable. We also have a number of former Blitz (B-team) skaters who are making their All-Star debut this September. We are excited to see them in action.

Who's the All Stars’ biggest rival?
While our opponents vary from season to season, the DC Rollergirls would fit the bill as our biggest rival. Our leagues practiced together a few times back in 2006 and have faced each other multiple times over the past few years; we even played a challenge bout at the first ECDX! DC won in 2007 and 2009 and while Dutchland bested them in March 2010, DC followed up by claiming victory at the East Region Playoffs in 2010. Most recently, Dutchland defeated DC in February 2011, and we’ve scrimmaged a few times since. Undoubtedly this will not be the last time we face off on the track!

What's the most interesting thing about your home city?
Lancaster (LANK-iss-tər) is a small urban area with a population of about 60,000 in South Central PA. It’s an old city, founded in 1730. The city core is diverse and it is surrounded by farmland and many towns and small communities. Being a successful roller derby league in Lancaster County, PA is a proud accomplishment for us. Lancaster is well known for its Amish and Mennonite populations (Yes, you can see Amish buggies at Wal-Mart in Lancaster County), and a deeply conservative Pennsylvania Dutch Culture which emphasizes modesty and self-sufficiency. What many people don’t know is that Lancaster city is a lively urban area with a strong music/arts hub. Our biggest challenge is trying to do outreach to both of those contingents, and find creative ways to market to both our urban and rural fans.

What's the All Stars’ most memorable derby moment?
Probably the first time we made DNN's power rankings. It felt like a huge accomplishment to be recognized on the international level with the other teams on the list, most of which are big city teams!

The trip to Naptown, involving the death bus drive, was also quite memorable! To start with, the way from Pennsylvania to Indiana does not typically involve Maryland. We are just happy no one got hurt.