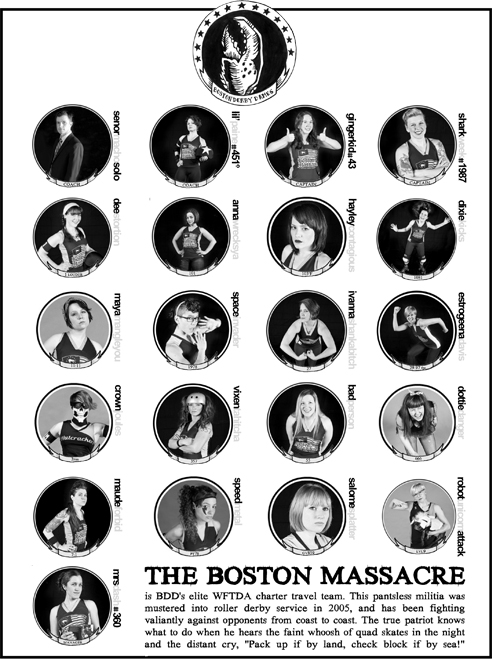 Based In: Boston, Massachusetts

Have there been any notable roster changes since your last Playoffs appearance?
We lost half our roster from last year's Playoffs, including key jammers Claire D. Way (transfer to Gotham Girls Roller Derby) and Sugar Hits (retired), but we think that we're stronger than we've ever been and we're ready to make some noise.

What's the Massacre’s most memorable derby moment?
This year, probably our upset of Arizona Roller Derby at East Coast Derby Extravaganza. Very few people gave us a chance going into that bout and it felt great to rise above.

Who's your biggest rival?
Historically, it was Charm City Roller Girls, but we're developing a nice friendly rivalry with Montreal Roller Derby that should continue into the foreseeable future. Both Montreal and Charm will be at Playoffs and, depending on how the brackets shake out, we could have an opportunity to play both of them.

Who should we watch out for on the track during your appearance at the 2012 Playoffs, and why?
The whole team. We take pride in the fact that we don't rely on superstars. If all goes well, none of our skaters will stand out individually. Having said that, it will still be very hard to miss Lil Paine and Anna Wrecksya.

What's one super special thing about the Derby Dames that makes skaters stay with your league?
We have a bobsled team.