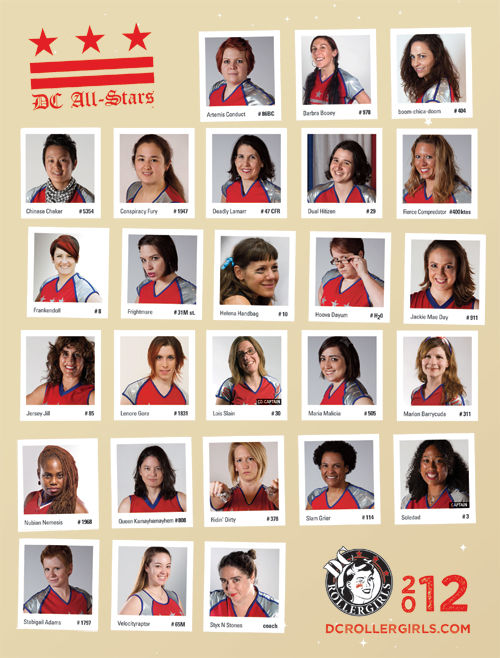 Based In: Washington, D.C.

Have you had any notable roster changes since your last Playoffs appearance?
Our team this year is totally different than our last Playoffs trip in 2010. We had a lot of turnover during and after the 2011 season, so about 2/3 of our team is new to the All Stars roster. Despite that, we’ve had the best All Stars season in our league’s history.

Who's your travel team's biggest rival?
Dutchland Derby Rollers has been one of our team’s biggest rivals from Day 1. We’ve always been pretty closely ranked and traded wins. The first time we played each other way back in 2007, it was a 1-point game and that sort of set the tone for our relationship on the track. Over the last couple seasons we’ve also developed a pretty good rivalry with Carolina Rollergirls. Although we’ve come close, we haven’t beat them yet, so we would definitely be up for a rematch!

What are some game highlights from your 2012 travel team season?
Although it ended with our August bouts against Rat City Rollergirls and Philly Roller Girls, we were on an 8-game winning streak, representing the bulk of our season. That is the longest winning streak in the history of our team, so we’re very proud of that! We started off the season with three close bouts at the Big O tournament in February, beating Emerald City Rollergirls (146-62) and narrowly losing to Silicon Valley Roller Girls (151-174) and Santa Cruz Derby Girls (125-159). That first win was a big deal, since our full team had really only been training together for about 6 weeks at that point. Beating Cincinnati Rollergirls (162-132) was a highlight for us, since they’re higher ranked within their region and we were not favored to win. Finally coming out on top of Maine Roller Derby (197-131) was also a huge thing for us, as we had never beat them before and it helped solidify us in the top 10 in the East.

What's your crowd like at home?
Our current attendance record is just under 2,500, but typical attendance is in the 1,250-1,500 range. Our fans are great, and it is always plenty loud in the D.C. Armory on bout day!

What's one little known fact about your league or your travel team?
We don’t hate fun! Despite being from one of the stodgiest cities in the U.S., we still know how to have a good time.