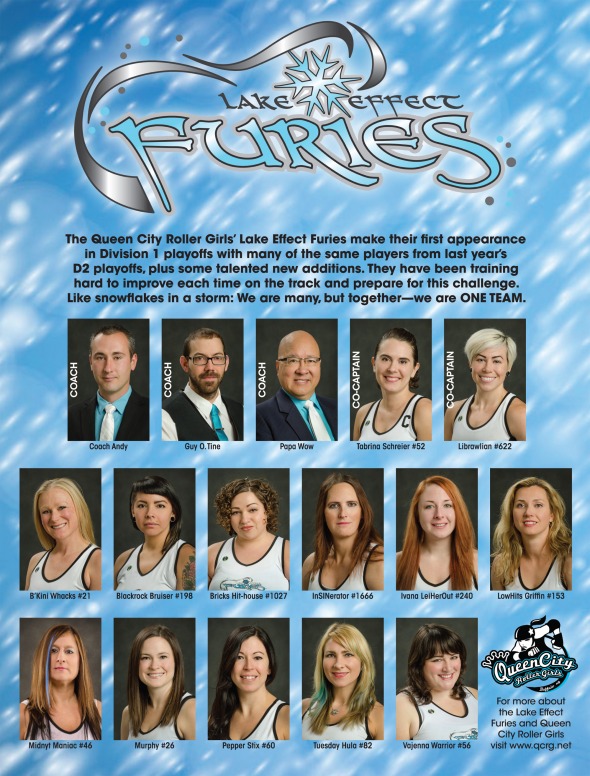 Based In: Buffalo, New York, USA

What was the turning point for your league to make it to Playoffs this season?
Our biggest game was actually not a win, but a close loss. In April we played against the very talented Steel City, a perennial D1 team. Having been in D2 for the past two years and on the D1/D2 bubble in 2015, our match-up with Steel City was a major test for us. We fell just short in the end (183-173 in favor of Steel City) but the game was very close from start to finish and helped to build confidence and confirm that we can compete at the D1 level.

Who are this year’s Captains of your travel team?
Our co-captains are Tabrina Schreier and LiBRAWLian. Tabrina is a highly respected veteran skater who has played since our league first formed back in 2006. She is a dependable leader and dedicated skater who can always be counted on to get the job done both on the track and off. LiBRAWLian is a gifted athlete and an intense competitor with a drive to always push higher and harder. Her attitude is contagious and she has inspired other players to always give 100% and strive to achieve even loftier goals.

Has your team experienced any retirements, transfers or injuries in the past year that have made a substantial difference in your play and performance?
Our travel team has had a couple changes this year. Abercrombie and Fists and Day TripHer are beloved veterans who competed at last season's playoffs but did not return this season - they are sorely missed. We did gain some off-season transfers, Ashes t'Ashes, Bricks HitHouse and Murphy, who have been great contributors for 2015.