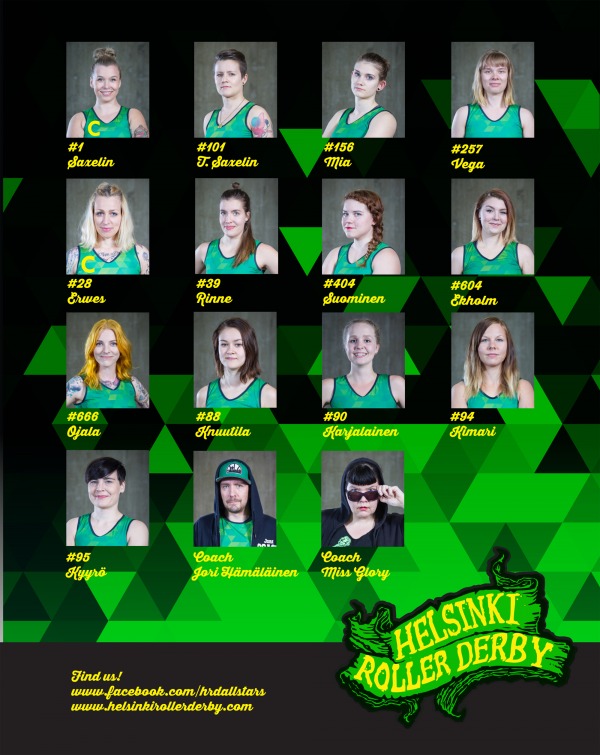 Based In: Helsinki, Finland

What was the turning point for your league to make it to Playoffs this season?
Last year during the European WFTDA tournament in Malmö we finally realized that we are capable of making it to D1. I remember the whole team talking about D2 being our goal but our interleague coordinator set a goal to get the team games that could possibly get us to D1. The pivotal moment for us was playing Terminal City in Vancouver the weekend before Big O. For a team ranked in the 60s to play such a tight game against a team in the top 20s was pretty amazing for us and it really gave everyone more confidence going into Big O and we had some pretty amazing games there too. Our whole season has been very steady so we are working hard to keep the momentum going.

Have you ever played any of the teams in your Playoff bracket?
We are super excited to play No Coast and possibly Angel City! We have played Boston before and it was a really tight game. Our game against Boston at Big O was definitely one of our biggest disappointments, we really wanted to win that game so it would be pretty fun to play them again.

Does your league have a motto, or words that it lives by?
We have a lot of really stupid sayings but one that sticks ou is "tästä on maksettu"..... which basically means "we've paid for this.” We spend a lot of money traveling for derby, and that usually means sitting in cars, trains, airplanes, and then not seeing almost anything of the places we visit other than the venue, hotel and a few healthy choice restaurants. We made the decision to work towards this but it has definitely come at a cost.