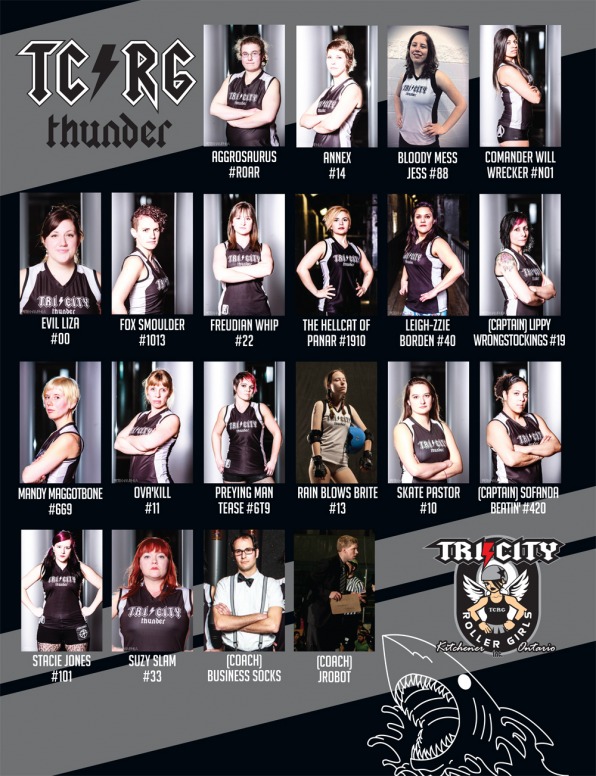 Based In: Kitchner, Ontario, Canada

Previous Playoff and Championship Appearances: This is Tri-City’s first trip to WFTDA Playoffs.

What was the turning point for your league to make it to a playoff this season? Was there a BIG WIN that pushed your team over the edge? We started the season ranked much higher (coming off last season's successes). We lost our 5 top skaters (and a couple of middle string too). So, basically, our entire first string of skaters left due to moves and retirements. It was a big blow to our team as we probably relied too heavily on power lines. We have first year skaters (as in first year playing roller derby!) and many 2nd and 3rd year skaters on our team this year. There are only 3 original vet skaters left (Lippy Wrongstockings, Stacie Jones, and Suzy Slam). This was a big rebuild year for us and we made one goal - get to D2 playoffs and stay in the top 60. We started rough and had some big tough losses but continually learned from them and got better and stronger. We had a unique opportunity to really deepen our bench with all the new skaters. So we didn't have a BIG win (although we did beat the Chicago Outfit, which sure didn't hurt!) but more of a continual build that we believe will help us to hopefully come out of this tournament higher than we came in.

Has your league experienced any retirements, transfers or injuries in the past year that have made a substantial difference in your league’s play and performance?
As mentioned above we lost our best skaters last year. Four of them also trainers as well as skaters. This has without a doubt affected our league. We actually had our largest league-wide loss overall at the end of last season. What it did do though was to lend more parity to our home teams. Thunder suffered the biggest hit but we prevailed and worked hard. There is still LOTS of work to do and we're very excited to do it!

Do you have a mascot? If so, what's its name? And will the mascot be with you at Playoffs? Do you have any special cheers for any of your skaters?
Thunder's mascot is a shark named Doma (short for Dominate). We actually don't know if our mascot is coming. Now that you mention it, we think we need to make that happen. No special cheers unless "HIT HER!!!" is a cheer.