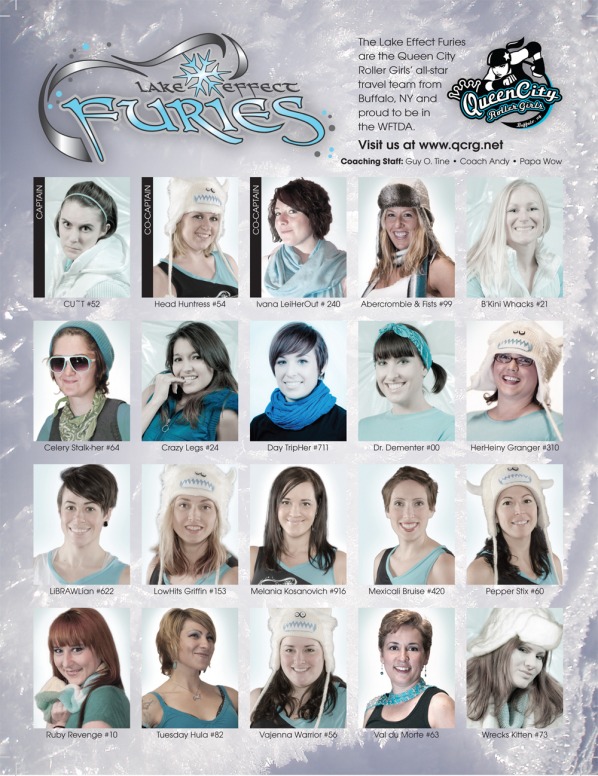 Previous Playoff and Championship Appearances: This is Queen City’s first time participating in a WFTDA Playoffs.

Do you have a mascot? If so, what's its name? And will the mascot be with you at Playoffs? Do you have any special cheers for any of your skaters?
The Yeti is the Lake Effect Furies’ mascot. He’s sort of like the abominable snowman; only much cuter. We’re not sure if he will be traveling with us to Kalamazoo just yet. August is a bit warm for the Yeti… but he might be able to be transported in an ice truck.

What was the turning point for your league to make it to a playoff this season? Was there a BIG WIN that pushed your team over the edge?
There was a big win and a loss that were both pivotal points in the Lake Effect Furies’ season. The first was a loss to #24 ranked Ohio Roller Girls in the Quad City Chaos Tournament in Toronto, Ontario. They are a great team but for most of the bout we kept the score close so it helped us build some confidence about playing highly ranked teams. The second bout was a win against the #40 ranked Grand Raggidy Roller Girls. They are another tough team and they beat us last season. In this bout our team started out strong from the first whistle and didn’t let go until it was over.

How have your practices changed since being named one of the teams to make it to the 2013 Playoffs?
Practice has gotten more intense and exciting. The goal of this season was to make it into Playoffs and practices now reflect our new goal of having success at the Playoff level of competition.