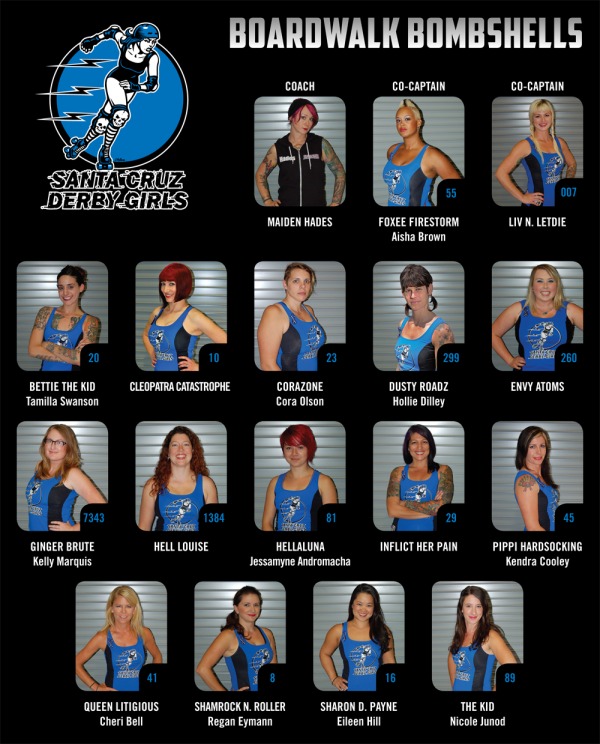 What are some game highlights from your travel team season this year?
We started the 2013 season ranked #62 and jumped 20 spots to #42. Our first game of the season was versus Terminal City in March. It was a close, well matched gamed, with 7 lead changes and a tie, and we took the win in the last jam of the game. Below is an excerpt from the recap from DNN:

Terminal City would come back. They took the lead 136-135 with nine seconds left on a 7-0 power jam by Lisa Suggitt (formerly Rollergirl). A quick Santa Cruz timeout assured there would be one more jam. Barbarich donned the star for Terminal City. Queen Litigious jammed for Santa Cruz. At first, it appeared Barbarich might get through first but was stopped by Shamrock N. Roller who seemingly held Barbarich forever with her chest blocking. Meanwhile, Queen Litigious picked up lead and called off the jam once it was clear she had the points she needed. Final score: 138-136 Santa Cruz.

Santa Cruz was perhaps the most impressive team of the weekend. They won all three of their bouts beating Slaughter County 186-141 and Jet City 165-162 as well. The Jet City bout on Sunday also came down to the final jam. With Santa Cruz up by one going into the final jam, their jammer Queen Litigious got a quick lead and proceeded to skate slowly hoping to run out the clock. Unfortunately for her, there was too much time left to do that, so as Jet City’s Tabula Rasa came up on her for her scoring pass, the two were battling it out to see who could complete the scoring pass first. Santa Cruz avoided disaster as Queen Litigious picked up the most points.

Coming away undefeated at the Wild West Showdown, in two games that came down to the last jam, especially against two teams ranked much higher than us at the time, drove our team to take our game to the next level to make our way to playoffs, and has been one of the many highlights of this season so far.

What was the turning point for your league to make it to a playoff this season? Was there a BIG WIN that pushed your team over the edge?
The turning point for our season started right off the bat, going undefeated in our first tournament at Wild West Showdown gave us the confidence and drive to want to make the push for playoffs. It showed to us that we had the right team dynamic, focus and energy to go all the way. We had three big wins against teams we had lost to in previous seasons and they were tough wins that challenged not only our skating skills, our strategy and the strength and focus of our team. We also had two very big wins at the Dust Devil Tournament and a strong showing against Sacred City Derby Girls giving us the confidence that WWS was not a fluke and that we had the team that was ready to make the push to be a high seed for D2 playoffs.