Ten minutes into the game to determine third and fourth place, tournament hosts Killamazoo Derby Darlins (#46, seed #3) asserted their dominance over NEO Roller Derby (#51, seed #5), quickly jumping the point spread to 40+ points. However, Killamazoo faced some difficulty when their blockers filled the penalty box, and jammer Aly-Kate Contusions spent two back-to-back minutes in the penalty box. NEO used the momentum shift to grab 30 points and bring the point spread within reach, at 82-63.

Killamazoo continued with blocker penalty trouble, and with only two blockers on the track, K’zoo jammer Jesse Girl had to do things all herself during a power jam. Unfortunate timing for Jesse Girl, as NEO jammer finished her penalty minute, sent the Killamazoo jammer to the box on a cut track. That’s when NEO used their own power jam and pack advantage to help jammer Hummuscide skate through to make it a 3-point game with eight minutes left in the first, 99-96 Killamazoo. 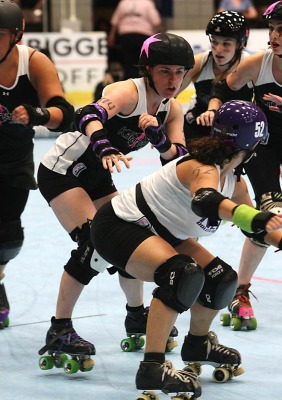 The last minutes of the first period were nearly point-for-point, and the penalty box (dis)advantage had nearly neutralized, with NEO at 24 penalties and 23 for Killamazoo. A track cut on NEO jammer with only 2:30 left in the first gave K’zoo jammer Doobie Trap a chance to regain a larger spread. The half ended with hometown favorites Killamazoo in the lead, 155-110.

Second half action started off as if halftime never happened. The skaters from NEO worked to regain the footing they lost in the closing minutes of the first, while Killamazoo continued to open the point spread. Aly-Kate Contusions fouled out of the game with 16 minutes left in the second half, putting Killamazoo down one skater on their bench, but the loss didn’t seem to put a damper on the ladies from Michigan. At the same time of the foul-out, Killamazoo used an official review that put NEO jammer Hummuscide in the penalty box for a track cut. In an unexpected turn of events that resulted in another momentum shift for NEO, the point differential went from 55 points to only 28, with Killamazoo at 205 to NEO’s 177.

After a rash of timeouts, both from teams and officials, NEO’s momentum shift stalled, and Killamazoo rushed to clinch the lead. Killamazoo Derby Darlins maintained their #3 seed, finishing third in the tournament, while NEO Roller Derby advanced from seed #5 to fourth.

« Back to D2 Playoffs: Kalamazoo Recaps