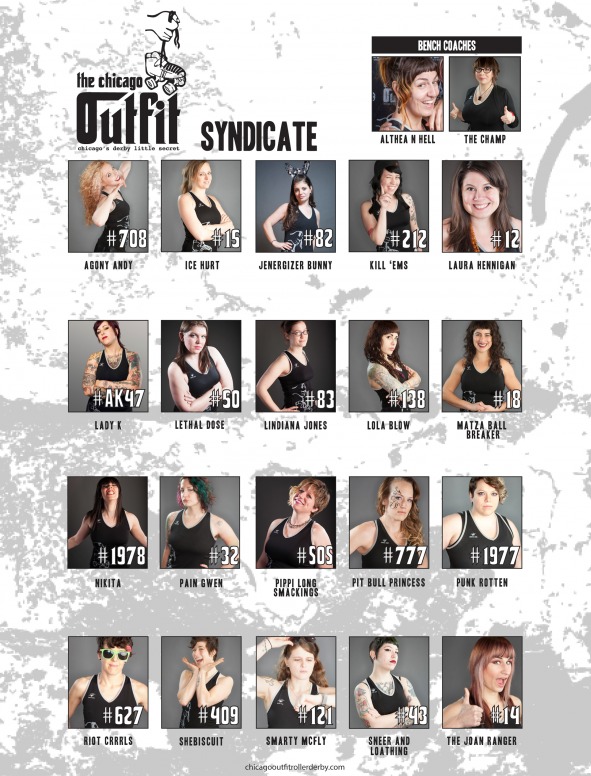 Based in: Chicago, Illinois, USA

What was the turning point for your league to make it to Playoffs this season?
The game against Tri-City was a big turning point for our team this season. We have had a solid season that has been a slow build. We wanted to have a strong showing against Tri-City as they are a D1 team and it was our last opportunity to help our rankings before tournament seeding. We really came together in that game and managed to pull out a big win. It was one of our best game of the season. However, we do have to mention Kansas City. We really love playing those ladies and they have become the Outfit's girlfriends.

Who are this year’s Captains of your travel team?
The captains this season are Lola Blow and Smarty McFly. Lola has been with the Outfit since it's inception (and even before when the Chi-Town Sirens existed.) Smarty originally skated with Arch Rival in St. Louis for 5 years and moved to Chicago in 2013. She skated the 2014 season with Windy City and then transferred to the Outfit after Championships last season.

Lola is such a positive cheerleader for the team. Her energy is infectious and gets other people excited. Smarty is also a positive, encouraging leader. She is very even-keeled and approaches the team and the game in a smart way. Imagine that.