In the 3rd Place game of the 2015 International WFTDA Division 2 Playoffs Cleveland Santa Cruz Derby Girls (Seed #1) competed against Houston Roller Derby (#6). These two teams last met in June at Midwest BrewHaHa where Santa Cruz took a 201-171 win. In a very defensive game Santa Cruz again came out victorious with a score of 154-141 to earn 3rd Place. Houston had the largest jams of the game with 21 and 17 point jams, but Santa Cruz was able to earn lead status more often and score more consistently. 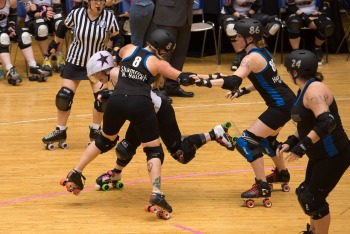 The game started much calmer than any game this weekend as there were no penalties committed in the first three jams. Both teams focused on defense and jammers took advantage of the holes that were created when the black and white walls melted together. In the seventh jam, CoraZone cut the track on her initial pass then cut again when she returned to the track. Her Santa Cruz teammates Skirt Vonna-Gut, Shamrock N. Roller, Hellth Hazard, and Beans made it difficult for Bustin’ Beaver to break through their walls. With some offensive help from Poysenberry Pie and Hell Cat F6F, she ended the jam with 13 points to give Houston a lead of 22-12. Houston kept a small lead through a few more jams full of slow scrums, but Santa Cruz took it back at the 15 minute mark with a score of 29-25.

Houston and Santa Cruz traded the lead four more times in the first half until Santa Cruz took their largest lead of 11 points and held onto it for the rest of the game. The final jam of the half illustrated how effective Santa Cruz’s defensive strategies could be. Beans, Hellth Hazard, and Shamrock N. Roller held Brandi Brown on her initial pass the entire time their jammer Queen Litigious was in the penalty box for a forearm penalty. Once the power jam ended, both jammers were able to find their way through the pack to pick up eight points each and end the half with a score of 71-63.

The trend of tight, slow packs continued in the second half and it often took jammers up to one minute to get out and earn lead jammer status. Jammers seemed most successful when they could push the walls into each other and squeeze through the holes left in the aftermath. Santa Cruz’s jammers did just that to increase their score just enough to keep Houston 10-20 points behind them. With under 15 minutes on the clock, Houston’s jammer Bustin’ Beaver quickly broke out of the pack for lead jammer status and added to Slayer Moon and Brandi Brown’s previous jams to bring the score to 110-100. In the following jam Slayer Moon struggled to get through a dynamic Santa Cruz wall, but earned lead and scored to bring Houston within five points of Santa Cruz.

The score of 110-105 quickly changed in the next two jams. Queen Litigious followed CoraZone’s offense off the jam start to earn lead and begin scoring while Houston’s jammer was sent to the penalty box for a cut. When she returned to the track she also committed a forearm penalty and Queen Litigious called the jam to begin the next jam with a power jam. TARAism added to Santa Cruz’s lead with a 14-point jam, and two jams later Queen Litigious was able to get through on two scoring passes to bring Santa Cruz to their largest lead of the game with a score of 145-109.

In the next two jams Houston’s jammers were able to hop their way through the pack thanks to some solid offensive efforts from their blockers. Slayer Moon and Brandi Brown trusted their teammates to hold back Santa Cruz’s jammers and it paid off as they scored 15 and 17 points, respectively. Santa Cruz held a 13-point lead going into the final jam. There were fewer than 30 seconds on the clock when Queen Litigious earned lead status. She watched the clock while she skated out of the pack and called the jam off as soon as the period clock expired.