The Kansas City Roller Warriors of Kansas City, Missouri, edged out Demolition City Roller Derby of Evansville, Indiana, to take the top spot on the podium at the 2015 International WFTDA Division 2 Playoffs Cleveland in a game too tight to allow either team to ever get too comfortable. 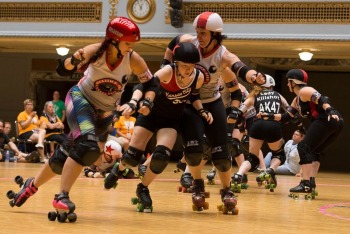 Demolition City put the first points up as the defense-heavy pack focused on holding Kansas City’s jammer while Bambi Thumpher pulled off two grand slam passes for a 10-0 lead. Four points for Case Closed put Kansas City on the board in the next jam, but short single-pass jams kept Demolition City’s lead inching up. A power jam for Kansas City’s Turtle Power brought the game back within a single pass thanks to bruising offense by Tuff Noogies, followed by a super-fast hit-and-quit jam by Mary Lou Wretched to force an 18-18 tie. However, Demolition City re-established a 23-18 lead in the next jam as Shelby N. Pain held Kansas City’s jammer while Hurtz Donut pulled a grand slam. Another tie emerged just two minutes later as Kansas City’s Bruz-Her made life very difficult for Demolition City jammer Lickety Split, later drawing a cut track penalty on her for a Kansas City power jam -- which it needed, as its jammer JessiKaboom had gone to the box earlier in the jam.

JessiKaboom kept Kansas City’s lead going to start the second half with a quick lead call and three fast points, though Demolition City’s Stepheree stole two before JessiKaboom could call the jam. Kansas City widened its gap as ever-present blocker Enigma, who played in every single jam until she fouled out in Jam 37, kept sucking Bambi ThumpHer back into the pack and eventually drew a cut, which jammer Reptar capitalized on with a power start in the next jam for an 89-47 lead.

But the lead was far from safe. Demolition City put up 30 points in three jams while holding Kansas City scoreless, capitalizing on a series of penalties to pivot-turned-jammer Xcelerator for 10-point runs by Bangs McCoy, Stepheree and Hurtz Donut, pulling the game to 77-89 with 20 minutes left in the half. A power jam switch did just as much damage, though, with Kansas City posting 23 points in two jams thanks to aggressive offense from Lady Killshot for Case Closed, followed by power jam for Case Closed thanks to a clever cut forced by tournament MVP Bruz-Her. Demolition City came out on top of a messy two-minute jam that saw both teams’ jammers in the box, with Demolition City’s Flex A. Belle and Shelby N. Pain drawing Kansas City’s jammer back to bring the score to 90-124 halfway through the period.

With everything on the line and single-digit minutes left on the clock, both teams jumped on power jam opportunities and used shutdown defense to keep the score inching up, pulling to 120-141 in Kansas City’s favor with five minutes left in the game. A power start for Stepheree after a late cut on Kansas City’s jammer gave Demolition City hope, pulling the score the closest it had been in the second half to 130-141, but Tuff Noogies knocked her to the ground to force a call-off from the floor. Although Demolition City did put eight more points on the board with just over two minutes left on the clock, Kansas City put up more as lead jammer Case Closed chose to run a two-minute jam while her pack held Stepheree, and later Shelby N. Pain after a star pass. As Kansas City’s Reptar got lead by leaping a straightaway with just under two minutes left on the clock and a 23-point lead, it was clearly going to be the last jam unless Reptar went to the box. Reptar cleanly picked up 10 points while Bambi ThumpHer was left to tangle with Bruz-Her and Lady Killshot but hung back for the last minute of the game -- which allowed Bambi to put up five points, but also guaranteed a clean jam and the ability to call the jam when the clock hit zero. And call the jam she did, with a 142-171 win for Kansas City.