Five lead changes, three tied jams and a one-point margin at the final whistle made for a high-intensity fifth-place game, with the St. Chux Derby Chix of O’Fallon, Missouri, overtaking the Brandywine Roller Girls of Downingtown, Pennsylvania, at the last second to end the 2015 International WFTDA Division 2 Playoffs Cleveland in fifth place. 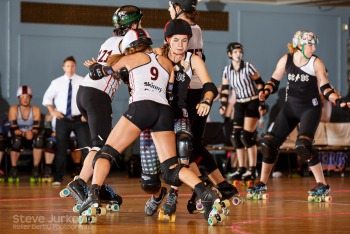 The game got rolling with a tight 3-0 jam in Brandywine’s favor, in which both teams created defense-focused walls and left jammers to fend for themselves. They quickly widened that gap with a 14-0 jam for lead scorer Lurz Lemon as DeckHerH8er and Crash Bansheekoot held St. Chux’s jammer trapped in the pack on her initial pass for more than a minute. St. Chux got on the board just a second later with a grand slam for jammer Conner as her pivot Pixie Dust-ruction held Brandywine jammer Raggedy Aneurysm in the pack, followed by two low-scoring jams as micro-packs for both teams couldn’t contain jammers to force quick call-offs.

St. Chux looked to have an opportunity to catch up as Jedi Knight-n-Gale made easy laps as pivot Whip L’Ash held Brandywine’s jammer at the front of the pack, but a track cut on Jedi Knight-n-Gale opened the door for Brandywine to maintain its edge, leaving a score of 42-27 in Brandywine’s favor. The break they were hoping for came just one jam later as St. Chux blocker Tara Eyes made easy holes for jammer Psychokid D. Freakout on a power jam that brought the game to a 42-42 tie. They then snapped up the lead in a 5-0 power jam as Conner overcame demolishing hits by Brandywine’s Anya Alnight to take a 42-47 lead. Smartly ending the jam while Brandywine’s jammer was still in the box, St. Chux added a few more points to its lead with a power jam start and carried into a scoring run, building to a 63-95 lead with 10 minutes left in the half.

A time out for Brandywine provided the reset they needed as they took advantage of a run of St. Chux penalties to chip away at the gap, bringing yet another tie with barely two minutes in the half. Yet another lead change immediately followed with a slim 105-102 margin as Brandywine pivot Skinny Guinea held St. Chux’s jammer at bay long enough for Buenas D. A$$ to snap up the three points needed to break the tie. St. Chux nearly closed the gap with 10 points on a power jam in the last jam of the half, but Brandywine pivot Rapid ArrhythMia kept St. Chux jammer Jedi Knight-n-Gale so preoccupied that Brandywine jammer Lurz Lemon overcame her time in the penalty box to win the jam 12-10 for a halftime score of 117-112 in Brandywine’s favor.

The game leapt to yet another tie immediately after halftime, as St. Chux jammer Jedi Knight-n-Gale faked out the Brandywine blockers for an easy lead call up the outside line before Lurz Lemon returned to the box. Brandywine snatched the lead back in a confusing jam in which lead jammer Buenas D. A$$ thought she’d been sent to the box but was returned to the track, immediately calling the jam before St. Chux jammer Psychokid D. Freakout could hit the pack, but a stronghold by St. Chux’s blockers in the next jam held Brandywine scoreless as Sugar Shock led St. Chux to a 121-125 lead.

The score stayed tight in a burst of molasses-slow jams marked by heavy defense and punishing walls, but St. Chux managed to eke out enough points for a 126-142 lead just past the ten-minute mark of the half. That lead was not to last, though, as DeckHerH8er’s devastating defense held St. Chux’s jammer in the pack as Buenas D. A$$ made pass after pass for a total of 19 points to push the score to 145-143. St. Chux pushed that score even closer in a two-minute jam that saw 19 points to Brandywine’s Lurz Lemon, but 20 points to St. Chux’s Conner on a brief power jam, forcing a one-point 164-163 score.

As the clock wound down with only a few minutes left, it looked like Brandywine wasn’t to be caught as it built up a 25-point cushion with eight minutes to go, although not without a fight from St. Chux as jammer Jedi Knight-n-Gale consistently popped a shoulder into any blocker foolish enough to present her with a legal target zone. Just when all seemed set, a two-minute jam that saw St. Chux’s Jedi Knight-n-Gale put up 19 points to Brandywine’s 5 kept the game in play, bringing the score to 205-197. Low-scoring jams kept hope alive for both teams, but a forearm to Buenas D. A$$ with less than two minutes to play left a gaping hole that St. Chux was only too happy to fill, pushing the score to 215-211 with 16 seconds on the clock. With top jammer Jedi Knight-n-Gale rested after two St. Chux timeouts in a row, she capitalized on her team’s active offense to grab a quick lead jammer call and just barely pick up all five points before calling the jam as Buenas D. A$$ came up hot on her initial pass out of the box, squeaking out a 215-216 win for St. Chux.

St. Chux finished the tournament in 5th Place. Brandywine finished 6th, after coming in as the #10 seed.