The 8th and 9th seeded Jet City Rollergirls of Everett, Washington and Oklahoma Victory Dolls of Oklahoma City, Oklahoma met for the first time in Game 2 of the 2015 International WFTDA Division 2 Playoffs in Cleveland. After Oklahoma won with a score of 222-190 they moved on to lose to Santa Cruz Derby Girls and Brandywine Roller Girls while Jet City defeated Columbia and lost to St. Chux. This led both teams to a rematch in the 7th Place game. Despite some scoring surges from Oklahoma, Jet City remained in control of the game and finished in 7th Place. 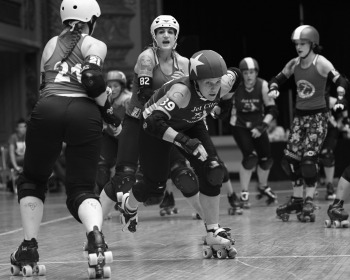 Oklahoma started the game with a power jam opportunity when Eva Derci committed a cutting penalty. Polly Punching Pocket was able to earn lead, but ILL-Ninja, Chantilly Cream, Cia WoodNwanna-Bia, and Star Tariot limited her to only one scoring pass of five points. Oklahoma grew a small lead until it was Polly Punching Pocket’s turn to sit in the penalty box for a cut during the 5th jam. Eva Derci scored 15 points to bring the score to 17-9 in favor of Jet City. Rachel Coffey, E-BOMB, Esha Spades, and Menace created a dynamic wall of red to hold back Jet City’s jammer in the seventh jam. Their strong defense gave Czech 1-2 the space to fly through small, spread out packs as she scored 24 points in the largest jam of the game. Two jams later Lethal Lamb added three points to bring Oklahoma’s score to 36 over Jet City’s 35. Jet City responded by pushing their way to the largest differential of the first half when they brought the score to 73-45. In the following three jams Oklahoma’s defense prevented Jet City from scoring, leading them to pass the star twice. This brought Oklahoma closer at halftime with a score of 85-67.

To start the second half jammers Eva Derci and Fatal Inferno both committed penalties on their initial passes. During the two-minute jam Jet City’s blockers focused on opportunistic offense to help Eva Derci score eight points while also limiting Fatal Inferno to only two points. Jet City continued this trend throughout the second half, as Beethoven’s Fist regularly used well-timed blocks to clear space for her team’s jammers while also being an integral part of the slow, braced walls holding back Oklahoma’s jammers. The strategic switches between offense and defense were effective in allowing Jet City to increase their lead while also preventing Oklahoma from getting within more than 35 points of closing the lead.

With 16 minutes left on the clock, Jet City created their largest lead of the game when Eva Derci scored 15 points and Whoa Nellie! added four points in the following jam to make the score 158-95. Oklahoma’s jammers Mount Crushmore, Czech 1-2, and T Pain responded by speeding up Jet City’s walls in the final 15 minutes to add 42 more points to their score. Scar Bomb and DEZdispenseHER worked with their teammates to limit Jet City’s scoring to 21 points even when their jammer sat in the box for two penalties in the second-to-last jam. Despite a strong finish from Oklahoma, Jet City won the game 179-137.

The top scorers for the game were Eva Derci with 69 points and Czech 1-2 with 59 points. Both teams earned lead jammer status 21 times and kept their skaters on the track more than in their previous game. Jet City reduced their penalties from 49 to 31 and Oklahoma reduced from 42 to 34. Jet City finishes in 7th Place and Oklahoma finished in 8th.