After a back-and-forth game that saw eight lead changes and came down to a nail-biting final two-minute jam, the Columbia QuadSquad Rollergirls of Columbia, South Carolina, prevailed over Treasure Valley Roller Derby of Boise, Idaho, to take ninth place at the 2015 International WFTDA Division 2 Playoffs Cleveland. 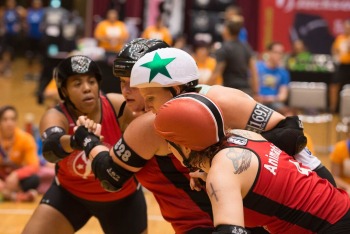 Columbia jumped to a quick 8-0 lead with two single-pass jams as both teams erred on the side of defense to keep scoring to a minimum. A glut of penalties to Columbia -- a common trend throughout the game -- gave Treasure Valley’s Demolition Barbie a 9-0 jam after beating the only Columbia blocker on the track, Cherry Maim-Her, to snag lead and the game’s first score change, 8-9. Just one jam later, Columbia retook the lead as jammer Poison Violet toyed with Treasure Valley jammer Cruel La La!, knocking her out of bounds and trying to suck her all the way back around the track to rejoin the pack at the front -- Cruel La La! didn’t bite, but Poison Violet still won the jam 4-0 for a 12-9 lead.

Both teams were forced to stick to one-pass jams as jammers chased each other out of the pack jam after jam, with the points primarily going in Columbia’s favor as they built a 26-13 lead with just over half the period left despite line-clearing offense from Treasure Valley’s Sinister Kate and endless jammer recycling from Ana Highway To Hell. Treasure Valley’s Demolition Barbie took advantage of a power jam and a micro-pack of just two Columbia blockers to rack up 15 unanswered points for the game’s third lead change and a 26-18 score.

It was Treasure Valley’s turn to inch up the scoreboard thanks to smart calls by its jammers to end things before Columbia’s jammers could hit the pack, and a nice 14-point power jam for Ella Snofury added comfortable padding to Treasure Valley’s 33-55 lead. But a two-minute jam in which both jammers hit the penalty box and raced right back to shove through the pack tilted the momentum toward Columbia, which won the jam 10-0 and picked up lead jam the next three jams in a row, closing the lead to just one point at 57-58 with 42 seconds left in the half. Treasure Valley inched the gap a tiny bit wider in the last jam of the half and smartly called the jam after one pass with Columbia’s jammer in the box so they could start the second half on a power jam, but the 57-61 score was hardly secure.

Treasure Valley used that power jam at the start of the second half to widen its lead by another four points, but Columbia jammer Cinnamon countered with five of her own immediately after, despite intense efforts by Treasure Valley’s Scarlet Danger, who held Cinnamon at the front of the pack for what felt like forever. The lead swung back to Columbia just one jam later, as jammer Poison Violet forced her way past the fight being put up by Treasure Valley’s Arelia Spine to change the score to 71-65. More short point-grabbing bursts kept the score tight, but Treasure Valley pulled it within one point with twenty minutes to go in the half, and snatched the lead back in the next jam with a dizzying exercise in mid-jam math that saw jammers trading points and the lead changing three times within the jam, ending 88-91 in Treasure Valley’s favor.

Columbia pulled the gap to just one point in the next jam as jammer Joy Recc-Her took bulldozing offense from blocker Chuck-Town Bruiser to steal points from Treasure Valley lead jammer Ella Snowfury. Treasure Valley had a chance to widen the gap with a power jam for Cruel La La!, but that turned into a power jam for Columbia’s Poison Violet after Cruel La La! successfully called the jam off even though she had not been awarded lead jammer. Despite a challenging wall of Arelia Spine and Riot Earp, Columbia’s Poison Violet pushed through to earn lead 40 seconds into the jam and pulled the lead into Columbia’s favor -- for a moment, at least.

Power jams abounded for both teams in the next three very messy jams, in which both teams upped the aggression but also the penalties. Treasure Valley pulled it together first, getting an 11-point run for Udaho as Columbia’s two blockers on the track seemed unsure whether to play offense for jammer Poison Violet, try a star pass or focus on straight defense, which ended the jam with yet another lead change and a 3-point lead for Treasure Valley, 118-121. That lead lasted just one jam, though, as Joy Recc-Her beat incessant recycling from Ana Highway To Hell to put up 14 points on a power jam, giving Columbia a 132-121 lead for the game’s last lead change.

Two lead jam calls in a row for Treasure Valley kept the score tight as the team pulled it to 133-128 with just 37 seconds on the clock. Lining up for what was almost certainly the last jam, Treasure Valley desperately needed lead jammer status, and Columbia desperately needed to kill time -- both of which happened. Heavily braced defensive walls kept both jammers from getting out, but a defensive pop from Columbia jammer Poison Violet dragged Demolition Barbie nearly the whole way around the track, killing a solid 20 seconds off the clock. Both jammers raced back around to the pack with Demolition Barbie emerging first with lead jammer status, but barely 20 seconds remained on the clock. As Demolition Barbie raced around to try to get the grand slam she needed, which was still possible with Columbia’s jammer still trapped on her initial pass, Poison Violet dropped back to play jammer defense rather than try to force her own way through, tangling with Demolition Barbie long enough to run the clock down. After the full two minutes ran out, Treasure Valley was only able to pick up one point for passing Poison Violet, who sacrificed her point but held Treasure Valley’s jammer from getting the rest of her team’s points for a final score of 133-129 with Columbia coming out on top.