Capping off a weekend of relentlessly shutting down their opponents with formidable defense, the Detroit Derby Girls (Detroit, Michigan) blasted their way to First Place of the international 2014 WFTDA Division 2 Playoffs in Duluth, Minnesota. 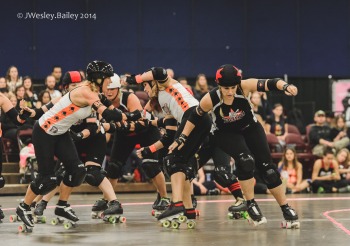 While newcomers to Division 2, Detroit was long a fixture at the top of the former North Central Region and took 4th meaning they have much more high-level tournament experience under their belts than some of their D2 opponents. That experience, displayed in the form of strong defensive teamwork and well-timed offense, paid off and earned them a chance to compete for the Division 2 Championship title in November.

The Fabulous Sin City Rollergirls, of Las Vegas, Nevada, put up an aggressive opposition to their powerhouse opponents but paid for their tenacity in the form of penalties.

Setting the tone for the game, Sin City jammers landed in the penalty box three times in the first 10 minutes of the game. Detroit held Sin City scoreless while putting up 72 points of their own.

When Sin City finally put points of their own on the scoreboard, it was at the discretion of Detroit’s Racer McChaser, who allowed her opponent to begin scoring as she waited to spring some teammates from the penalty box.

As the half wore on Detroit began picking up a few jammer penalties of their own while Sin City adjusted their strategies. They began slowing Detroit’s scoring barrage while tallying more points on their side of the board.

Sin City started the second half trying out some new strategies, winning the point differential for at least a few jams. But Detroit quickly adjusted, and the fast-skating, hard-hitting style of both teams began landing Sin City skaters in the box again. Jammer and blocker Bustin Ace fouled out with about 14 minutes left in the game.

In the final 10 minutes, Detroit dialed in and began putting up big jams again, including a 29-point jam from Feta Sleeze, finishing the game with about three times the points of Sin City.