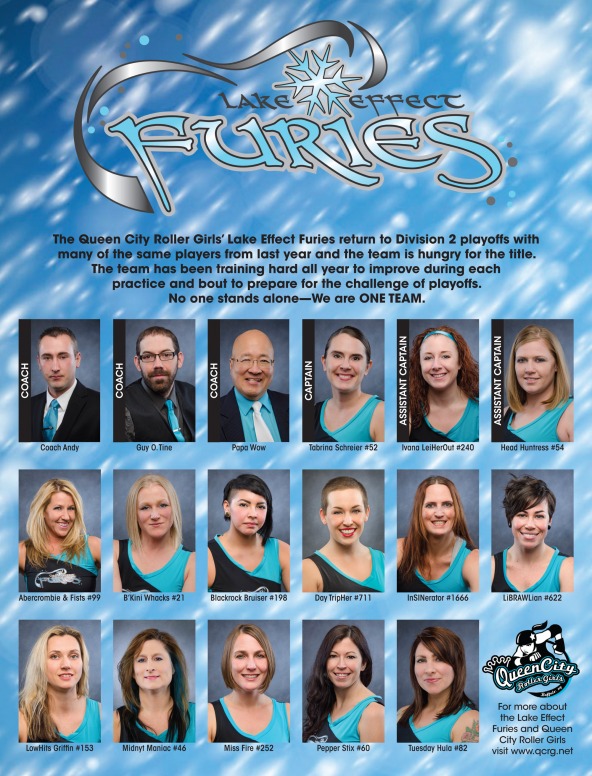 Based In: Buffalo, NY, USA

What was the turning point for your league to make it to Playoffs this season?
Our goal this season was to build on our success breaking into playoffs last year and to solidify ourselves in the higher end of D2. This included rematches against all three of the teams we faced in the 2013 playoff.

A turning point for us early in the season was when we erased an 84 point deficit late in our game against Killamazoo to secure a 3 point win back in March. We carried that confidence boost into strong showings against Tri-City and Ohio and some big wins over Ithaca, Hammer City, and Burning River that helped seal our ranking going into playoffs.

Does your league have a motto, or words that it lives by?
The Furies’ motto is: “One Team.” It started in 2012 after a particularly steamy summer practice. It is both a celebration of the team spirit and a reminder that cohesion and teamwork are essential.

Is your travel team doing anything new or special to prepare for Playoffs?
Practice has gotten more intense and exciting. The goal of this season was to make it into Playoffs and practices now reflect our new goal of having success at the Playoff level of competition.

Do you have a loyal following of fans at your home venue? Will any of them be traveling to Playoffs?
We sure do! Many of our fans and home team players are trying to arrange their schedule to come root us on.