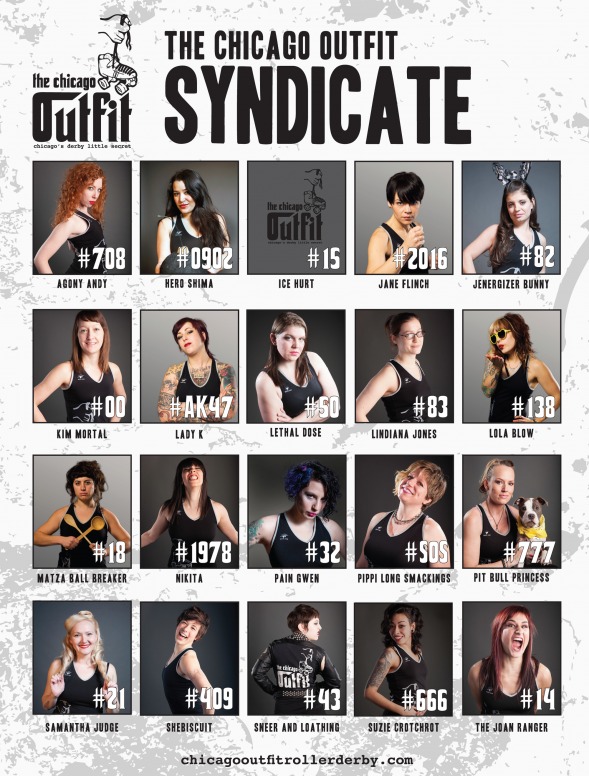 Based In: Chicago, Illinois, USA

Have you ever played any of the teams in your Playoffs bracket? Which match-up are you most excited about?
The Outfit is up against Killamazoo for our first game, and we haven't gone up against each other since 2010. We won that game by a significant number, but that was four years ago! It will be good to play them again!

The last time The Outfit played Demolition City was back in 2009. Again, we won by a lot, but that was years ago, before we were even WFTDA!

The most interesting match up would be if The Outfit played Grand Raggidy. The Outfit traveled to Grand Rapids for our first bout this season, and we lost 331-105. This score kicked us into high gear and created a focus for our training. We worked extremely hard after this loss, and shortly thereafter (less than 2 months), we went undefeated at Spring Roll! Throughout the season, we have changed and grown in a number of extremely positive ways as a league, and our more recent games are a testament to that forward movement. If we had a rematch at playoffs this year, The Outfit vs Grand Raggidy would be one to watch!

Who are this year’s Captain(s) of your travel team? What makes them good leaders?
Our captains are Matza Ball Breaker and Lindiana Jones. Matza is heavily influenced by Michael Jordan in the hit movie Space Jam! She is filled with motivational tips and helps amp up our determination and energy. Lindy breaks things down and keeps her leadership simple and smart. She is all about a direct plan of attack, and she brings our attention to our strengths and weaknesses to create solid strategy.

Has your league experienced any retirements, transfers or injuries in the past year that have made a substantial difference in your league’s play and performance?
One month before our first bout, Queefer Sutherland left The Outfit. Initially, this was very difficult for the charter because some of us have been skating with her since day one. It was sudden and unexpected. Despite this huge change, The Outfit family has worked together and our league is stronger than it has been in a while.

This season, our league has had a number of severe injuries which required surgery. On our charter, The Big Lebekski, had to have reconstructive surgery after a knee injury. As all injuries are, this was devastating to our charter, but Beks has made huge strides with her recovery! We expect to see her back full force next season!