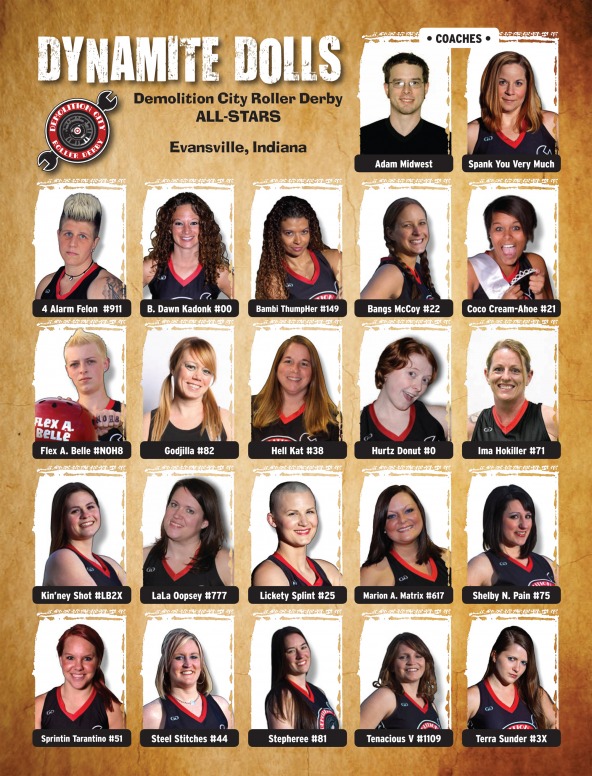 Based In: Evansville, Indiana, USA

What was the turning point for your league to make it to Playoffs this season?
I think beating Nashville (although non-sanctioned) was our mental turning point. I think we came in wanting to meet this D2 goal, but once we beat Nashville, I think we all truly believed we would get here. Then beating Cinci was the icing on that cake.

Has your league experienced any retirements, transfers or injuries in the past year that have made a substantial difference in your league’s play and performance?
Ima Hokiller played on our team for several years before taking a job in New York and playing for the Meat Packing District with Gotham. She has recently transferred back and has rejoined the team and it feel like she has never left… well except for the fact that she learned so much while she was in New York and has brought it back to help our league grow!

In our last home bout of the season Molly Slam’em, an up and coming blocker, broke her ankle and will be unable to travel with us to Canada.

At the end of the 2013 season long time veterans Megan M Hurt and Spank You Very Much decided that is was time for them to retire; however, they both chose to continue to help the league on the bench. Megan M Hurt has been bench coaching for our B team the Destruction Dames and Spank You Very Much has been bench coaching for both the Destruction Dames and the Dynamite Dolls. Hell Kat also chose to step down from the Dynamite Dolls at the end of the 2013 season to help as their bench coach, but she continued to play for the Destruction Dames during the 2014 season. After encouragement from her teammates she has agreed to return to the roster of the Dynamite Dolls for the tournament and going into the 2015 season. One of our referees, Adam Midwest, has agreed to make the transition from official to bench coach so that Hell Kat can be on the roster. The calm presence of all four of these individuals on the bench has been a tremendous help and has been a big part of our success.

Does your league have a motto, or words that it lives by?
"DCRD Woo!" is sort of our battle cry and we live and play by the saying/moto "roll hard" meaning we give it everything we've got.