The second day of the WFTDA North Central Region Playoffs Sept. 11 delivered a bevy of fiercely competitive bouts, with multiple matches being decided in the final minutes.

Chicago's Windy City Rollers (#1) and Saint Paul's Minnesota Roller Girls (#7) earned trips to the 2010 WFTDA Championship tournament, Uproar on the Lakeshore, in November and will compete for the title of No. 1 in the North Central region on Sunday. The Cincinnati Roller Girls will face the Mad Rollin' Dolls, of Madison, WI, in the third/fourth place bout. The winner of that game will also advance to the Championship. 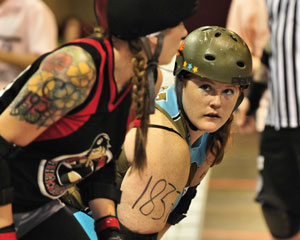 Minnesota delivered another thrilling, come-from-behind performance to earn their Championship slot. Trailing by 21 points at the half, Minnesota took the lead from Madison's Dairyland Dolls about halfway through the second period. What followed was a tug-of-war that wasn't decided until the final jam. Minnesota finished the game with 119 points to Madison's 107.

Windy City's path to the Championship was via an equally thrilling, blow-by-blow slog against #4 seed Cincinnati. With frequent lead changes through much of the game, Windy City laid down the law in the last 10 minutes to pull off a 172-147 win.

Tournament hosts Brewcity Bruisers (#5) closed out the day with a nail-biting finish for the second day in a row against the #9 seeded Naptown Roller Girls. Piling on another upset after their strong performance on Day 1 of Thunda on the Tundra, Naptown's Tornado Sirens clung on to a one-point win over Brewcity.

The day's action also marked a new WFTDA tournament record. Detroit Derby Girls' Racer McChaser scored 32 points in a single jam during their bout against the North Star Roller Girls. While higher scoring jams have been recorded in WFTDA sanctioned games, the prior tournament record was a 30-point jam by Joy Collision of the Charm City Roller Girls during the 2009 East Region tournament.

Don't miss the final day of this action-packed tournament! Watch as teams battle for their final regional ranking, including the regional championship, on www.derbynewsnetwork.com.