Upsets mark first day of Thunda on the Tundra

WFTDA tournament season started off with two upsets in the North Central Region Playoffs Sept. 10, 2010, as #2 seed Detroit Derby Girls were knocked out of contention and #9 seed Naptown Rollergirls bested a higher-ranked rival to advance in the tournament.

In the first bout of "Thunda on the Tundra" in Green Bay, WI, Naptown unleashed a first-half shutdown of the #8 Arch Rival Rollergirls. Despite a higher-scoring second half, Saint Louis' Arch Rivals were not able to make much of a dent in their 56-point halftime deficit. Indianapolis's Naptown took the game 119-70, advancing to face #1 seed Windy City Rollers later in the day.

Although they ran into consistent penalty trouble, with jammers frequently seated in the box,  Chicago's Windy City held off Naptown in their afternoon match-up, winning 177 to 85. 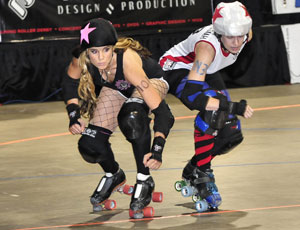 After handily beating #10 Omaha Roller Girls early in the day, Minnesota Roller Girls advanced to challenge #2 seed Detroit Derby Girls. After a slow start, Minnesota began closing the point spread and never looked back. They pulled into the lead early in the second half, ultimately winning 119 to 99 and advancing to Saturday's semifinals.

The night closed with a nail-biter, as #4 seed Cincinnati Roller Girls barely held off tournament hosts Brewcity Bruisers (#5) to advance to the next round of play. Also advancing to the next round are the Mad Rollin' Dolls, of Madison, WI.