In a ferocious battle between the fast and physical Columbia QuadSquad Rollergirls (9 seed, WFTDA 37) of Columbia, S.C., and the cool, calculated play of the Boston Derby Dames (6 seed, WFTDA 22), the Boston team emerged with a 219-115 win to take seventh place at the International 2014 WFTDA Division 1 Charleston tournament. That victory was far from assured, though, as Columbia kept the point spread to just 26 points going in to the half and continued to put points on the board all the way to the final whistle, but Boston’s persistent recycling on the entire Columbia squad carried the team through. 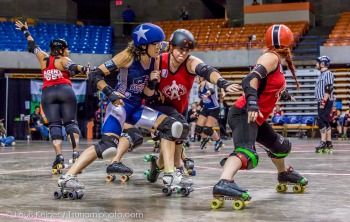 Boston put the first points on the board with a 2-0 jam, but Columbia responded with a full pass before Boston could get its jammer around again, bringing the score to 2-4 in two short jams that saw both jammers chasing each other into the pack and forcing quick calls. For the second and final lead change of the game in the third jam, Boston took advantage of a power jam for Flyin’ King, sending blockers Vixen Ta Hitcha and Ginger Kid to pinch Columbia to the middle by pushing from the in and out, clearing wide lanes for King. Poison Violet, jamming for Columbia, still managed to race through the pack from the penalty box for a quick initial pass and steal four points as King hesitated to call the jam, leaving a 12-8 score.

“It was kind of getting our rhythm. We had about 15 minutes of each game where we kind of lost control,” explained Boston’s Maya Mangleyou. “Today, we played our game – we didn’t get to sleep in like we were hoping we would for [the 2 p.m. game for fifth place], but everyone was well rested; everyone played well.”

Although both teams played hard defense and relied on heavy recycling, continually knocking jammers out of bounds and dragging them to the back of the pack, Boston’s jammers recovered to gain lead jammer for most of the game. Columbia continued to employ the strategy they’ve used since June of attempting a star pass – or making Boston’s skaters think they were passing the star – in order to get their jammers out of the pack to force an end to the jam and limit scoring. Boston ended up using the same strategy in the first half when Flyin’ King re-entered the pack from the penalty box for a back block call, removing her helmet cover to escape up the outside line and forcing Columbia jammer Poison Violet to call the jam in the middle of the third pass.

“It’s something that we’ve found to be very effective about limiting the damage in jams where we don’t have the lead jam,” said Columbia coach Sonny Pro Bono. “And we happen to have a pretty big group of players who have interchangeable skills sets, so they could be pivots, could be jammers.”

However, a successful star pass for Columbia from Joy Recc-Her to Mal Pacino in the next jam saw Columbia bring the score within 20 points to 61-41 in the next jam. Those were the last points Columbia would put up for four jams, as Boston’s defensive walls engulfed Columbia’s jammers, separating them from their pivots to prevent star passes. Although Columbia was able to put up points throughout the half, Boston’s recycling, including an apex jump by blocker Ginger Kid to suck Columbia jammer Poison Violet back into the pack, contained Columbia enough to rack up a slightly wider lead, 101-75, at halftime.

That energetic momentum carried into the second half, in which Columbia’s jammers aggressively sought points even when Boston had lead jammer, stealing points before the fourth whistle throughout the game. Columbia struggled to reset in the first few jams of the second half, scoring just one point for every five Boston scored for a score of 150-88, and most of those on a two-minute jam that still saw Boston collecting more points than Columbia.

Even the jammers got in on the blocking in the second half, with Poison Violet and Space Invader battling right off the line, but quickly went right back to trying to push through fierce walls created by both teams heavily focused on defense. Columbia’s blockers, particularly Mal Pacino, took longer strides to re-absorb Boston’s jammers after they were called as lead jammer, which slowed down Boston’s scoring and even allowed Columbia’s jammers to steal more points without being lead. But Boston’s Shark Week devastated Columbia’s jammers, forcing them to the outside line and knocking them out and back over and over. By the last jam, Boston had increased its lead to more than a hundred points – which, although insurmountable for a last-jam push from Columbia, didn’t stop jammer Chuck-Town Bruiser from picking up four points as Boston jammer Lil Paine waited for the clock to wind down so she could call the jam, 219-115.

“We were expecting that level of physicality. We decided to come in and play really calm and pay a slow game,” Maya Mangleyou said. “Columbia was very happy to come in and run the packs, but we are a very stop-disciplined game, so we tried to out-feet them, if that makes sense.”

Sonny Pro Bono said that although Columbia did not win the bout, his team will go home feeling good.

“Rankings are important, but they aren’t what drives our team. We’re driven by trying to play the best games we can play,” he said. “Looking over back the whole weekend, I feel proud given the constraints we had, of how we performed. I think my team fought very hard throughout.”