The third day of the international 2014 WFTDA Division 1 Playoffs in Charleston, West Virginia, started with a close game between the 8 seed Jet City Rollergirls (#30) of Everett, Washington and 10 seed SoCal Derby (#38) of San Diego, California. Jet City outscored SoCal in the end, despite their higher penalty count for blockers and jammers. Jet City was able to take advantage of the power jam opportunities they did have and successfully shut down SoCal’s jammers when they were on the track. 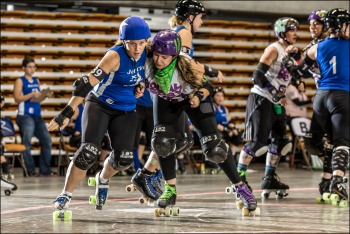 Jet City controlled the first 15 minutes of the game, but SoCal started to catch up in the last part of the first half. At the very end of the 13th jam Jet City’s jammer Ivana Hercha was sent to the box for a high block penalty. Immediately after the fourth whistle Jet City requested an Official Review to contest the call, but the call was not overturned. During the Official Review, Ivana Hercha left the penalty box early during the timeout and was assessed an illegal procedure penalty. This gave SoCal a whole minute to take the lead for the first time in the game. Irie Strider struggled to push her way past Assaulted P-Nut and Doll Dozer, but was able to add 20 points to SoCal’s total. SoCal led with 54 points to Jet City’s 48.

SoCal slowly added to their lead throughout the rest of the half, and traded points and lead jammer statuses with Jet City a few times. Ivanna S. Pankin, Trish The Dish, Marcy Slayground, and Bo Toxic were successful at holding back Whoa Nellie!, Momma Wreck N Ball, and Eva Derci to end the half with 85 points over Jet City’s 69.

SoCal held onto the lead for a while, but with about 18 minutes left in the game, Jet City was able to take a one-point lead with 99 points after both jammers spent time in the penalty box for cutting. In the next jam, SoCal reclaimed the lead as Buns of Fury scored nine points. Ivana Hercha took the star for Jet City and also took the lead back for her team in another jam that featured power jams on each side. Both teams attempted to isolate a blocker at the back of the pack during power jams, but defense from SoCal’s Irie Strider and Jet City’s Assaulted P-Nut made it tough on the jammers. After scoring 15 points, Jet City held a lead of 114-112.

Eva Derci added 23 points for Jet City during a confusing jam for SoCal. Kung POW Tina lined up behind the jammer line without a star helmet cover as the jam started. She made it out of the pack on her initial pass, but wasn’t able to earn lead or score as she remained an inactive jammer. SoCal’s bench coach tossed her a helmet cover from the sidelines in an attempt to stop Jet City’s scoring run. However, a helmet cover can’t be added to a jam in progress, so she was instructed to remove the cover and continued play as an inactive jammer.

Jet City extended their lead until the end, as they scored 69 points in the final 15 minutes. SoCal was only able to add an additional 21 points to their score and ended the game at 133 to Jet City’s 183.

Jet City finishes the tournament one spot below their starting seed in 9th place while SoCal stays at 10th.