Fighting for third place at the international 2014 WFTDA Division 1 Playoff Charleston, the Philly Roller Girls (Seed 3, WFTDA 12) overtook an early lead for the Atlanta Rollergirls (Seed 4, WFTDA 13), winning the game 183-116. At stake was not just finishing on the podium, but taking the last spot to go to the championship tournament in Nashville next month. 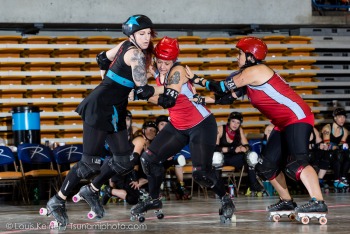 “Our vibe was really good today. We knew it from the moment we walked into the locker room. We hadn’t felt that way yet this weekend,” said Philly’s Ginger Vitis. “Yesterday playing Victoria, we didn’t know what to expect of them – we’d never played them. I think we went in there totally serious, really focused, but not our usual fun, dance party team. Today we had a dance party to ‘We’re Not Gonna Take It’ multiple times before we started.”

After a fist bump between Atlanta jammer Jammunition and Philly jammer VanEssa “V-Diva” Sites, the jam was off to a huge 24-point start for Atlanta after Sites went to the penalty box twice on back block calls. Philly started putting points on the board in the next jam, a 4-1 jam as Philly ran to play offense for jammer Brazilian Nut, but Atlanta built a cushion up bit by bit over the first jams of the half, working up to a 24-point lead after a 10-point jam by Jean-Juke Picard at the seventh jam.

Those would be the last points Atlanta would put on the board for seven more jams, though, as Philly blockers Ginger Vitis, Tarantula and Teflon Donna played quick but effective offense to get a slew of lead jammer calls for their team and Philly’s walls enclosed Atlanta’s jammers. Atlanta was able to grab four points thanks to a lead jammer call for Jammunition and a quick first pass, but a track cut to Jammunition forced her to lose lead jammer status and gave Sites a power jam, with Philly winning that jam 25-4 despite incessant recycling by Atlanta blockers Madditude Adjustment and Switchblade Siouxsie. Thanks to a power jam from Philly rookie jammer Herrmann Monster, playing her first games on Philly’s charter this weekend, Philly had a large enough lead that even a power jam and blocker advantage for Atlanta in the last jam couldn’t close the gap, ending the half 114-67 Philly.

The second half started with a renewed Atlanta leaning harder on Philly, keeping them to just three points in the first two jams while Atlanta’s offense, led by Queen Loseyateefa, was able to spring its own jammers quickly and force call-offs. A spate of lead jam calls for Atlanta, in which they held Philly scoreless for four jams and racked up 19 points of their own to bring the score to 117-86, seemed like the tide may be turning in Atlanta’s favor. They managed to hold Philly to just 9 points in the next five jams after that thanks to a spate of Philly penalty trouble, and picked up 10 more points when Sites picked up both a forearm penalty and a backblock penalty in the same jam.

With Philly fans in the stand singing the “Rocky” theme song, the Philly team surged onwards, with jammers Brazilian Nut and Clam Jammer running laterally across the track, searching for cracks in the tough Atlanta defense to run through, and had racked up a 170-109 lead with just three minutes to go in the half. After dual official reviews bought both teams a few minutes to catch their breath, revolving power jams for both Philly and Atlanta allowed both teams to put points on the board in the second-to-last jam despite offense from Philly to get its jammer out and Atlanta’s success at blocking a star pass from Sites to Tarantula. Starting with a power jam and barely a minute left on the clock, Clam Jammer earned lead for Philly on a power start, but was sucked back into the pack as Atlanta jammer Chokecherry pushed her way into the pack. After making one pass with Chokecherry still pinned by a wall of Philly blockers, Clam Jammer called the jam to an end after the period clock expired, concluding the game with a score of 183-116.

“We went out there to have fun, and of course we went out there to win, but sometimes it doesn’t work out,” said Atlanta jammer Chokecherry after the game, noting that penalties slowed the team after a quick start – including six penalties in the first half by captain Wild Cherri, who did not skate the rest of the bout so she could assist her team from the bench. “I’m really impressed with the way our team pulled together in the second half because we had her on the bench. Our team was able to pull together to close the gap a little bit tighter without her on the track.”

Atlanta will go home to rebuild for the next season, starting with tryouts in the near future and a focus on solidifying defense, minimizing penalties and building experience for their jammer core, Chokecherry said.

Philly, meanwhile, progresses to the international 2014 WFTDA Division 1 Championships in Nashville. Ginger Vitis said the timing actually works out well for the team because they’re already so hyped from preparing for this weekend’s tournament.

“We never really have a lull. We just keep going forward, which might be lucky for us,” she said. “We don’t let anything be easy – of course we couldn’t have won yesterday, we had to give all of our friends at home a heart attack. But we’re just going to keep going for that first game win … I don’t want to see much of Nashville!”