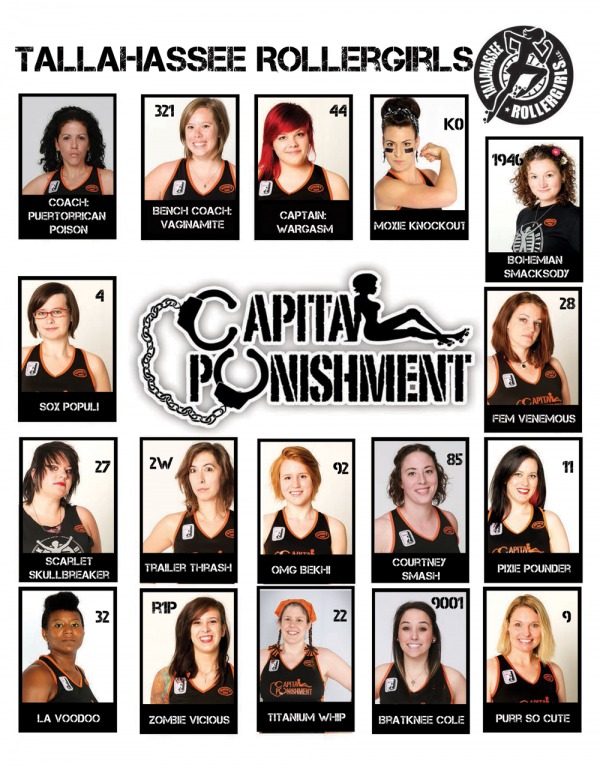 Based In: Tallahassee, Florida, United States

Has your league experienced any retirements, transfers or injuries in the past year that have made a substantial difference in your league’s play and performance?
If you compare our regionals roster last year to our D2 roster this year, you’ll notice very little overlap. We have lost about half of the people that have skated for us, many in the past few months. This includes ALL of our main jammers (Catchup retired, Stone Her transferred to TXRG, Great Wall of Gina moved, and low maim retired from TRG). We now have some amazing blocker/jammers (lovingly called Blammers) that have stepped up to fill the incredibly large skates they left. We’ve also suffered some major injuries that took out some great experienced blockers (Erin Breakabitch had shoulder surgery a few weeks ago, Vaginamite re-tore her ACL this season). The girls we have left have dedication, desire, and heart, and we will fight till we can’t fight no more.

Have you ever played any of the teams in your Playoff bracket? If so, how did those games turn out? If not, which match-up are you most excited about? Why?
We are so excited about our competition at D2! We have played 5 of the teams at the tournament and we love them all. It feels like we are going to a big family reunion! We had a wonderful time playing Dallas at the beginning of the year at Clover Cup and we are excited to face them again. We also got to play Duke twice in that tournament and would love to face off with them again since they are such amazing sportswomen and athletes. We were bested by Omaha twice during the regional tournament last year and would love to play them again too! We would love a public bout against DC since we played them earlier in the year in a closed bout. Finally, a Tally-Blue Ridge match up this weekend would be perfect, since we had a home game scheduled against them this weekend that we obviously had to cancel.