Road to Champs: Texas vs Minnesota

By Deadwards
Via Derby Central

In the last game of Day 1 of the 2015 International WFTDA Championships, tournament hosts Minnesota RollerGirls will take on the Texas Rollergirls at 8pm CST.

Minnesota took 3rd in Omaha after beating Boston, losing to Angel City, and taking Montreal by just 28 points. Texas finished in 2nd place in Dallas after beating Sun State and Philly, and then taking on Rose City in an exciting game full of big scoring runs for each side. The Texecutioners and MNRG met at WFTDA Championships once before, in 2011 with Texas moving on in a 141-108 victory. The only other time they played each other was at this weekend's venue, The Legendary Roy Wilkins Auditorium, in March of 2013 and Texas again took the win, 300-151.

Texas went to quite a few events this year, which resulted in their 8-5 record, including their recent playoff games. In Dallas they utilized their deep bench and were able to play a variety of skaters, which meant common names like Hauss the Boss and Jackie Daniels only played 2 of their 3 games. They stuck to a tight 3-jammer rotation of Olivia Shootin' John, Fifi Nomenon, and Bloody Mary against Sun State, and OJ emerged as lead scorer with 130 points. Hipel had taken to the star the past few seasons, but she took on the role of bench coach at playoffs due to an injury. Against Sun State, all three jammers broke the century mark, and their defenders helped them to put up multi-pass points in almost every jam they got lead jammer status in, except 4, which led them to their first win 349-111. 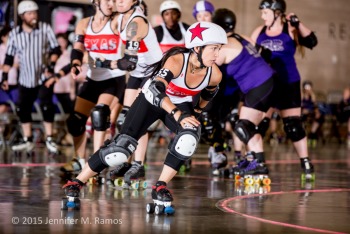 Against Philly, Freight Train and Hauss the Boss made their debuts for the weekend, and they were the second and third highest scorers after Fifi Nomenon. Bloody Mary struggled early on in this game with penalties, and only got 5 jams on the track. Despite Philly leading at halftime, 64-57, Texas outscored them 146-35 in the second half and took their second win by 104 points. In the final game of the weekend they faced Rose City, a team they held the lead over for most of the first half at the Big O, but this time Texas took the lead for only 1 jam. The score gap kept varying drastically as Rose City ended up with 14 jammer penalties to Texas' 4, but scoring for each team in both halves stayed consistent with 128/129 for Rose and 112/111 for Texas.

The Minnesota Rollergirls sit at a split 5-5 record in 2015, with 2 of those wins being added at playoffs. Their first win in Omaha was against Boston and with Jacked Pipes and Fannie Tanner only taking the track as jammer, they utilized Shiver Me Kimbers and Yekaterina Lapitsky as both jammers and blockers. After a closer first half, they held the Massacre at 44 points for 7 jams while they racked up 58 points, and went on to win 201-112. Despite losing against Angel City by 109 points next, it was one of the highlight games of the weekend in a tense, action-packed match up. The two had played earlier in the season, and that time MNRG kept it a bit closer at 195-109. In this game Second Hand Smoke and Hurtrude Stein also took on jamming duties, with Smoke putting up 22 of their points. Hurtrude added 3 of her own, but really shone as a blocker all weekend long.

Their final game against Montreal was another one to watch, and after 3 lead changes in the first half, Montreal held MNRG scoreless for 5 jams, taking the lead and keeping it by 1 point at the half. The second half saw 3 more lead changes but then Minnesota pulled ahead and maintained the lead through the end for a 162-134 win. Second Hand Smoke was more consistently jamming in this game, and led scoring at 58 points with Jacked Pipes behind her with 46.

Both Texas and Minnesota adjusted their jammer rotations to the team they were playing, and have some solid players in the pack who will make it a tough fight for opposing jammers. Texas has Barabara Ambush, Stone Her, Trauma 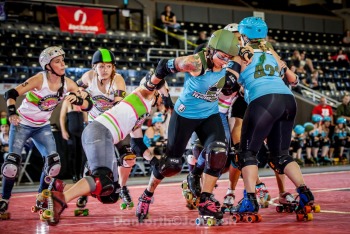 and Polly Gone leading their blocking force, which they often set up in a braced triangle while 1 player is there for support or offense. Minnesota's “Great Wall of St. Paul” often consists of Diamond Rough, Sampson, Polly Punchkin, Hurtrude Stein, and Second Hand Smoke when she isn't jamming. Their braced, rotating 3 or 4 wall was relentless against their opponents this year, and they were able to play coordinated swarming offense to help their jammers as well. Texas had a few blockers get close to fouling out, but all stayed on the track with their main playoff penalty being direction of play. Minnesota struggled most with forearms and pack penalties.

These two teams are similar in that both their jammer lineups vary in who is struggling with penalties, and also in their strong packwork, but against teams they both played this year, they differ. Minnesota took on Philly in May, losing by 85 points, while Texas just beat them in a playoff win by 104 points. Texas took on Angel City at the Golden Bowl, beating them by 46 points while Minnesota lost to them twice this year by an average of 98 points. Minnesota also played a tough game against Gotham at Midwest BrewHaHa this year, scoring 57 to their 281, while Texas competed closely with Rose City, who as of this time last year could hang with the likes of New York.

The winner of this first round game will go on to play Victorian Roller Derby League at 4pm CST on Saturday, the #1 seed from Tucson. Minnesota matched up with them at last year's Champs, losing by 47 points, and Texas took them on already this year at the Big O and lost as well, 165-95.

See Texas and Minnesota in Game 4 at the 2015 International WFTDA Championships starting on Friday, November 6. Get your tickets, or make your watch party plans to view live coverage on WFTDA.tv and ESPN3.

Next Post: Road to Champs: Denver vs Bay Area