Two Champs Newcomers Face Off in the First Round

By Deadwards
via Derby Central

The third game on Friday at the 2015 International WFTDA Championships will be the Jacksonville RollerGirls, who advanced as the #2 seed from Jacksonville Playoffs, and Arch Rival Roller Girls, the #3 seed from Playoffs in Tucson. They will face off at 6pm CST, and the winner will look forward to a 2pm meeting with Gotham Girls Roller Derby (#1 Seed Omaha) the following day.

Both teams were #3 seeds in their respective Playoff tournaments and earned their first trip to WFTDA Championships this year. Jacksonville and Arch Rival have both been teams quietly on the rise for the past few seasons, and 2015 became the year that each have mastered solid defense. Combined with their successful jammer rotations, both have had a nearly unstoppable season and get to make their debut with the final 12 teams of tournament season.

Tucson was the first Division 1 tournament this year, and Arch Rival headed out West seeded 3rd, the same place they started in 2013, but that year they finished the tournament 6th. Since then, it seems they wanted to get back to that spot, and finished much stronger this time around. Their 13-1 pre-playoff record set them up against #6 seed Team United, which put them on a solid path for a Champs invite. Despite having beat the Iowans earlier this year, the tournament newbies were still potentially a wild card, but Arch Rival ended up beating them by 4x the points they did in May. The next day they faced the #2 seed, Bay Area, and after Arch held the lead briefly, the BAD Girls beat them by 60 points. 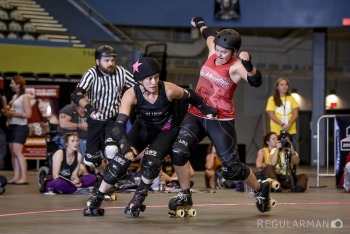 After winning one and losing one, they were set up with Rocky Mountain for the 3rd place game, which played out as an intense, penalty-heavy battle in which Arch Rival was down for more than half the game. They had 7 jammer penalties but with a 5-jammer rotation of Brickyard, Swanson, Harmony Killerbruise, Bricktator, and Mighty Mighty Boston, the damage was spread among all of them, putting none of their star power in extreme danger. What they lost in points for those fouls, they gained in double the amount of power jams Rocky gave back to them. With their 39-point win, Arch picked up their first trip to Champs, and shut Fight Club out after the Coloradans had attended the past two years in a row. With playoffs under their belt, that pushed Arch Rival to a 15-2 record this season, and an average win margin of 190 points.

Jacksonville on the other hand has won by an average of 224 points this year by utilizing a strong 3-jammer rotation of Krispy Kreme-Her, Jamsterella,and Erin Jackson. At Playoffs, New Jax first came against Detroit, and handled them with a 262-71 win by picking up lead jammer status 72% of the time. Next they took on Denver and, in a rankings upset, they fought through the demoralizing Denver defense and with some impressive walls of their own, they took down the Mile High Club 193-163. This 30-point win came despite picking up more penalties than Denver, including 11 for their jammers, which showed off the excellent teamwork of Kat Von, Legs R Us, and Atomic Mel-Down. This win pitted them against London, a battle they fought last year in the semi-final round, and even though it was a loss, they still had a reserved their spot at Champs.

With playoffs done, this put Jacksonville at 11 wins and 2 losses, their only other loss coming at the hands of Angel City by 61 points. One of their wins this season was against Arch Rival, who they took down by 81 points, so the pressure is stacked on St. Louis to avenge their previous loss. Both took on Ohio with similar results, but they each took on Tampa as well with different outcomes. Arch Rival played them more recently, and beat them by almost double what Jacksonville did in June. Both teams had some jammer penalty troubles at playoffs, but Jacksonville's shorter rotation may weigh on them more heavily, while Arch Rival can keep fielding fresher legs. 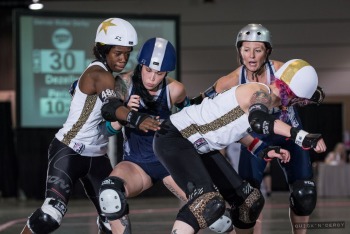 In the pack, both seemed to start with a 4-wall off the line, but were always quick to brace. Jacksonville seemed more inclined to take on an amorphous box formation while Arch Rival fell comfortably into pairs. The slow, sticky positional blocking of K. Seiber, Mayor Francis Slayer, and Rinehart is what helped Arch Rival get out of their game against Rocky Mountain as winners, but their blockers also struggled with direction of play penalties and multi-player blocks. New Jax fell victim to pack penalties and directional blocks as well. To add to the list of similarities between these two teams, they both are coached by skaters from their local men's league; Streak and Chuckie of Magic City for Jacksonville and Percy Controll and The Saint from this year's Men’s Roller Derby Association Champions, the GateKeepers, for Arch Rival. Neither team has taken on reigning WFTDA Champions Gotham Girls Roller Derby before, but a trip to Champs is already a big win for both.

See Jacksonville and Arch Rival in Game 3 at the 2015 International WFTDA Championships starting on Friday, November 6. Get your tickets, or make your watch party plans to view live coverage on WFTDA.tv and ESPN3.