Denver and Bay Area meet for the second time this year

By Brooklyn Defiance
Via Derby Central

Denver Roller Derby and Bay Area Derby Girls played each other once this season at the Hometown Throwdown in Portland, where Denver beat BAD, 168-144. The result of this game was a near inversion of the last time they met at the 2014 International WFTDA Championships. In 2014 Bay Area defeated Denver 169-130, though Bay Area’s roster has undergone major changes since then.

With only 12 returning skaters from the 2014 charter, multiple transfers, a new coach, and Kristi Yamagotcha stepping down as bench coach mid-season, Bay Area has continued to come together as a team and get stronger throughout the season. Making it to Championships during a rebuilding year is an impressive feat for any team.

At the 2015 Big O, Bay Area won 2 out of 3 games, beating Atlanta Rollergirls and Philly Roller Derby but losing to Victorian Roller Derby League. BAD’s next loss was against London during their Brawlifornication Tour, 150-76. At Hometown Throwdown, Bay Area won 1 out of 3 games, losing to Rose City and Denver. At home, Bay Area suffered two close losses during Golden Bowl, the first to Angel City by 12 and then to Texas Rollergirls by 13.

At the Tucson Playoffs, BAD played as a cohesive team and finished second behind VRDL after beating Terminal City and Arch Rival. Bay Area’s offense was less penalty-prone than earlier in the season and their defensive walls looked more comfortable with each other.

Denver scheduled a particularly difficult season for themselves. At The Big O, The Mile High Club also won 2 out of 3, defeating Texas and Philly Roller Derby but losing to Victorian Roller Derby League. Back in Colorado, Denver faced top ranked Gotham Girls Roller Derby, losing 89-193. They had a terrific showing at Besterns where they won all four of their games, including tournament hosts Rocky Mountain and another first round champs contender, Rat City. At the Hometown Throwdown in June, Denver’s only loss was to Rose City. Later in the season they traveled to New York for a rare chance to play Gotham at home, losing by 213 points. While in New York, Denver also played Philly again, winning 199-171. The second matchup between these teams saw a significantly closer margin of 28 points, as opposed to their first meeting where Denver won by 134. 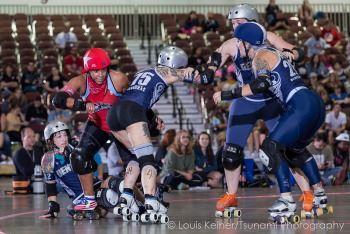 At the Jacksonville Playoffs, Denver beat their first round opponent, Charlottesville, as expected but lost in an upset game to tournament hosts, Jacksonville Rollergirls. This forced them to play for third place, beating Atlanta to earn their spot at Championships.

Three of the four teams to beat the Mile High Club this season are number 1 seeds heading into the WFTDA Championships in St. Paul. Flat Track Stats gives the odds to Bay Area to win Friday, but Denver will have the benefit of knowing they already took BAD down once this season. Fans should expect another close, hard-fought game between these teams.

See Denver and Bay Area in Game 2 at the 2015 International WFTDA Championships starting on Friday, November 6. Get your tickets, or make your watch party plans to view live coverage on WFTDA.tv and ESPN3.