By Brooklyn Defiance
Via Derby Central

Angel City Derby Girls and Rat City Rollergirls faced each other in June last season where Angel City won 250-79. This time, Angel City comes into the game as the number 2 seed from Playoffs in Omaha with a current WFTDA ranking of 6. Rat City finished 3rd in Dallas and is ranked 12th in the WFTDA. While Flat Track Stats predicts an almost certain win going to Angel City, Rat City proved in Dallas that they should not be underestimated.

ACDG’s jammer rotation of Satan’s Little Helper, Chica Go-Lightning, Micki Krimmel, and Ghetto Fabu-lez combine explosive power and fast footwork that out maneuvered many teams' walls throughout the regular season and into Playoffs. Throughout the season Angel City struggled with jammer penalties. In Omaha ACDG racked up a total of 28 penalties: against Gotham, ACDG’s jammers 13 took total box trips and 11 against Minnesota and 4 against Helsinki. Blocker penalties can also affect Angel City, namely the tendency for multiple blockers to comment penalties within the same jam, which thins out the pack and creates a smoother pass for the opposition.

In order to reach Championships in St. Paul, Rat City beat Stockholm with a comfortable margin of 131 before losing to Rose City by 137. Despite the loss, Rat City showed what the rest of their jammer rotation can do: Xena was their top scorer, followed by Luna Negra then Genevieve Moore. 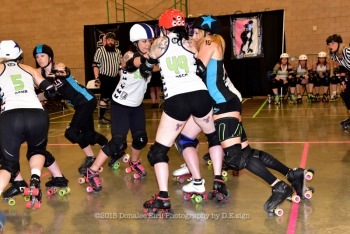 Rat City’s final game in Dallas against Philly Roller Derby could be the most telling of how they will fare in St. Paul. Although Vanessa Sites (Philly Roller Derby) was by far the highest point scorer of the game on either team with 91, Rat City’s jammer output was much more evenly spread across their jammer rotation—something they will need to do in order to win in St. Paul. Luna Negra and Kayla Gaska each scored 57. Xena followed closely with 44. Rounding out the rotation was Moore, who scored 15, and Ramon with 5.

Rat City’s blockers did what they do best, namely wearing down the opposition and holding the remainder of Philly’s jammer rotation to low scores across the board.

Angel City’s road to Championships began with a victory over Helsinki by 376 points. The following game against Minnesota was much closer, 192-83. While penalties remained an issue for ACDG in this game, it was not enough to sink the Hollywood Scarlets. As with Rat City’s final game in Dallas, ACDG’s points were fairly evenly spread across their jammer rotation. Satan’s Little Helper was the top scorer with 67 followed by Ghetto Fabu-Lez with 54. Micki Krimmel scored 45 and Chica Go Lightning was able to score 26. 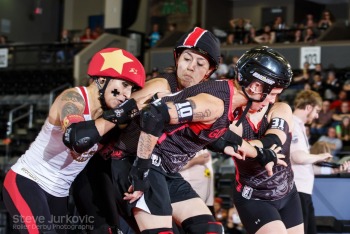 In their final game of playoffs, Angel City faced Gotham and lost 205-83. While the outcome of the game did not provide any surprises, it is worth noting that Angel City held Gotham to their second lowest scoring game all season (Gotham’s lowest scoring game in 2015 was against Denver, 202-67) and their lowest differential this season with 122. Both stats speak to the power and effectiveness of Angel City’s defense.

Both teams share similar styles of play that should make for an interesting game. Both Angel City and Rat City are known for their physical gameplay that has the tendency to rattle and frustrate their opponents. Each of these teams pride themselves on an intense cross-training program whose effectiveness is reflected in their blockers ability to lock down and knock out jammers.

Rat City’s jammer rotation of Luna Negra and Kayla Gaska will be able to match ACDG’s physicality to punch through the pack. Luna Negra has the speed and agility in addition to strength, but the most dangerous component in Luna Negra’s arsenal is consistency. Luna Negra had a point differential in Dallas, TX of 31 and only took 4 trips to the box. While Gaska has a tendency to be more penalty heavy, the aggressive style of jamming will be a good match against ACDG.

See Angel City and Rat City in Game 1 at the 2015 International WFTDA Championships on Friday, November 6. Get your tickets, or make your watch party plans to view live coverage on WFTDA.tv and ESPN3.

Next Post: Road to Champs: Jacksonville vs Arch Rival