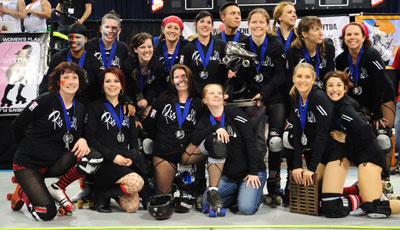 East Region Seed #2, Philly Roller Girls started the first bout of Championship Day at Uproar on the Lakeshore with the first points, but ultimately fell to Gotham Girls Roller Derby, #1 from the East. The game to determine third and fourth place featured slow starts (to the chagrin of the crowd), fast-paced pack play, and a high scoring game for Gotham jammer Bonnie Thunders, who had 108 points at the game’s conclusion. The slow starts garnered chants from the crowd of “let’s skate forward,” but with them, the Liberty Belles were able to delay jammer release for up to 40 seconds to get skaters out of the penalty box; Gotham also used the slow start. In the 18 jams of the first period, the teams split lead jammer status—Gotham with seven, Philly with eight, and three no lead jams—but it was Suzy Hotrod’s 13-points in the eighth jam of the first that started the skaters from New York on their way to victory. 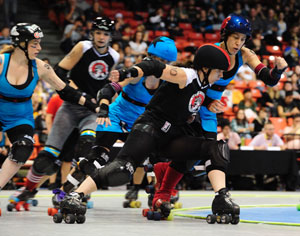 Philly wasn’t able to recover after Hotrod started the crack in the Belles’ scoring power. On the blocking side of things, both teams played strong, three-skater walls, eliciting several multi-skater block penalties. The Gotham Girls ended the first period with 74 points to Philly’s 26. Gotham grabbed the bulk of lead jammer status in the second half—14 out of 17 jams—and capitalized on the strategic advantage to hold Philly to a 25-point gain in the half. Two major cut penalties from Philly’s jammer Persephone in two separate jams cost the Belles, as Gotham jammer Bonnie Thuders used the opportunity to widen the gap, scoring 20 points in the first power jam afforded by Persephone, and 19 in the second power jam. Bonnie Thunders’ 108 points, added to 50 from Suzy Hotrod and four from Hyper Lynx, gave Gotham the win. The skaters from New York took home third place, and Philly grabbed fourth, after a 162-51 point bout.

In what was ultimately a rematch from the West Regional Tournament, #1 in the West, Rocky Mountain Rollergirls, took on and defeated #2 and defending 2009 WFTDA Champion, Oly Rollers, by a mere one point in the last seconds of the bout. Rocky Mountain drew first blood when jammer DeRanged scored 12 points in the first jam. The Cosa Nostra Donnas stayed nearly scoreless for five jams, until Atomatrix scored 13 points on a power jam, with Rocky’s jammer in the penalty box. Rocky Mountain had a jammer swap-out mere seconds before the fifth jam started, and Amanda Jamitinya couldn’t get off the track before the jammer whistle blew. The kerfuffle gave Oly a chance to put a wedge in Rocky’s hopes. 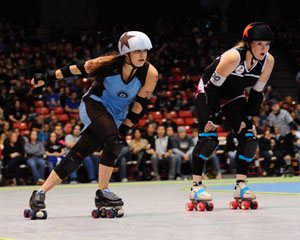 The period was a blur for Rocky after that, as they were unable to gain lead jammer status until the 15th jam of the period. Oly, however, capitalized on the opportunity as Atomatrix scored 69 points in the period. The first closed wth Rocky at 49, Oly at 84. The second half was full of fast-paced play, big hits, and jammers going to the penalty box for track cuts, as well as accumulation of minors. The penalty trouble proved problematic for Oly, giving Rocky Mountain five power jams, during which Rocky scored more than 70 points. Rocky Mountain suffered two significant losses during the second half as blockers Urrk’n Jerk’n as Booty Block Ya and Psycho Babble each fouled out of the game. The penultimate jam put Oly up 146-138, but jammer Tannibal Lector got called to the penalty box for a major back block, setting Rocky up for a power jam, as they called a timeout with only 16 seconds remaining on the period clock. The pack was small, with only Amanda Jamitinya and Assaultin’ Pepa to assist jammer Frida Beater. When Frida gained lead jammer status, her task of scoring nine points was made easier as DeRanged came out of the penalty box. When she passed the last opposing Oly blocker, Frida checked to make sure she’d scored enough points, and called off the jam, ending the bout. The crowd erupted and the scoreboard read a victory for Rocky Mountain: 147-146. 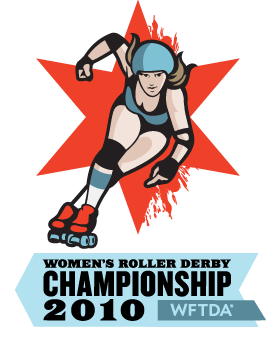