Rocky Mountain Rollergirls and Oly Rollers will go head to head to determine who will be WFTDA's 2010 Champion. 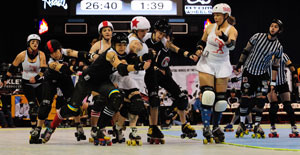 Day 2 of Uproar on the Lakeshore started off with two teams familiar with fast-paced tournament play, as Gotham Girls Roller Derby defeated the Texas Rollergirls 151-52. The first period saw the teams split lead jammer status a nearly equal number of times—Gotham with 10, Texas with nine—yet the point spread didn’t reflect the close competition. Despite Gotham finding themselves in penalty trouble towards the end of the first period, the half closed with Gotham 65, Texas 39. The blocking genius of Gotham’s Papierschnitt—keeping Texecutioner Belle Starr from her standard jammer killer capabilities—coupled with the myriad whips from Sweet Sherry Pie allowed the ladies from New York to dominate lead jammer status in the second period, taking it 16 times in 19 jams. The Angie-Christ and Luce Bandit deftly kept Gotham jammer Bonnie Thunders from scoring for nearly a minute during one jam in the second period, but it wasn’t enough to hold Gotham, or to rally. Texas scored only 13 points in the second period, while Gotham put up 86, ending the game as the period clock ran down. Texas is eliminated, and Gotham will advance to Game 9 later in the day. 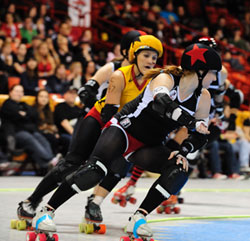 Despite four lead changes in the first period, the Rocky Mountain Rollergirls defeated a tenacious Charm City Roller Girls in Game 6, 165-103. Rocky Mountain drew first blood in the bout, and established the lead for the start of the game, but in the seventh jam of the first period, Charm’s Just Carol scored 16 points during a power jam, securing the first lead change. Urrk’n Jerk’n as Booty Block Ya from the Fight Club took back the lead only four jams later with a 15-point power jam. The lead changed two more times in the first, as the teams jostled for points, until Charm City got into some penalty trouble at the end of the first, and the period ended Rocky Mountain 67, Charm City 52. The half gave the skaters from Rocky a chance to regroup, and after a 28-point power jam from Urrk’n, Charm wasn’t able to muster any more lead changes. Just after the giant point gain by Rocky Mountain in the second jam of the second period, Charm City pivot Dolly Rocket accrued four majors in one jam—two for insubordination, one for a multi-player block, and one for an out of play block—and spent the next four minutes in the penalty box, giving Rocky a pack advantage. Charm’s chances for unseating Rocky were further lessened later in the period, as Rosie the Rioter was escorted from the track for getting too many trips to the box, followed by Dolly Rocket’s later ejection. Losing those two blockers, along with all-star jams from She Who Cannot Be Named—with a 25-point jam—and DeRanged –with 14—and taunt-worthy blocking from Psycho Babble, sealed the fate of the ladies from Charm City. They are eliminated from the tournament, and Rocky Mountain will play Gotham later in the day. In Game 7, Philly Roller Girls established their lead early in the first period, with consistent point gains throughout, despite splitting lead jammer status almost equally with Kansas City Roller Warriors. While Kansas City had two 20-point jams—one from Case Closed in the last jam of the first period, and one from Kelley Young at the start of the second period—it wasn’t enough to stop the Liberty Belles; the game ended with Philly 147, Kansas City 126. Jammers from both teams saw penalty trouble, and a jammer swap-out in the penalty box happened twice in the first period and once in the second. The Roller Warriors’ Track Rat was able to get lead jammer in the fifteenth jam, but when trying to call of the jam, she took a flying leap into the infield and the jammer referee missed her call, allowing the Liberty Belles’ Shenita Stretcher to match Track Rat’s points. Kansas City’s Case Closed had a textbook power jam in the last jam of the first period: Philly had a full penalty box, and Case Closed capitalized to give her team momentum going into the half. Kansas City used that momentum to capture lead jammer status five times out of the first six in the second period, including Kelley Young’s 20-point power jam. When Kansas City’s blocker, Annie Maul, fouled out in the tenth jam, the hopes for the Roller Warriors left the stadium with her. The Roller Warriors were able to gain lead jammer status for the last four jams of the game, but it wasn’t enough to crack through the Belles’ established lead. Kansas City is eliminated, and Philly advances to Game 10. 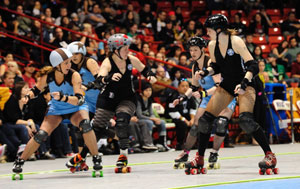 With home-track advantage, the Windy City Rollers fought tirelessly to match the speed and point scoring prowess of the skaters from Oly Rollers in Game 8. The crowd went wild every time a Windy City skater got lead jammer, but the hometown favorites didn’t capitalize enough on the status to defeat the Cosa Nostra Donnas; Chicago lost to Oly 76-178. The points stayed rather close during the first period, and Windy City established the lead for the first three jams. However, after a 17-point jam by Tannibal Lector, Oly took control of the scoreboard, and didn’t let go for the rest of the game. Tannibal led point scoring for Oly in the first period, scoring 30 points. Femme Fatale closed out the period with a 15-point jam, after holding Windy scoreless for four jams; the period ended Oly 74 to Windy City’s 31. The second period saw Chicago with some serious jammer penalty trouble, and Windy City jammer Kola Loka spent two jams in a row in the penalty box. Oly blockers Sassy and Rettig to Rumble waterfalled all over the Windy City jammers, while Hoosier Mama and Ying O’ Fire were consistently strong for Windy City. Oly eliminates Windy City and will play Philly in Game 10. 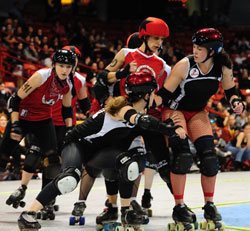 The Fight Club of Rocky Mountain established a strong lead early, and held onto it despite the best efforts of Gotham Girls in the last minutes of the game. With strong front walls from Rocky Mountain’s Frida Beater, DeRanged and Psycho Babble, even some the top jammers in the country, Bonnie Thunders and Suzy Hot Rod couldn’t break through. Early in the first period, Gotham had some penalty trouble, and rarely fielded a full pack, making it easier for the Fight Club to hold the Gotham Girls scoreless for the first six jams. As Suzy tried to break through the pack, Amanda Jamitinya kept recycling her through the pack with blocks to the outside of the track; Hot Rod remained scoreless in the first period. Two solid jams from Swede Hurt and Bonnie Thunders kept Gotham in the game, as the period came to a close. Urrk’n Jerk’n led the Rocky Mountain Rollergirls in points with 36 in the first period, putting her team at 75 at the close of the half to Gotham’s 31. Gotham made some adjustments during the break, and came out recharged in the second half, holding Rocky Mountain to eight points in the first 10 jams of the second period. With nearly 15 minutes remaining in the period, and the score at Rocky 93, Gotham 54, the skaters from the Fight Club started to eat the clock with fast pack play, dominating lead jammer status with eight in a row. Gotham rallied, and the crowd went wild as the ladies from New York managed to get lead jammer for six jams in a row, picking up 25 points. It wasn’t enough, however, as they are eliminated and Rocky Mountain advances to the Championship bout. The final score: Rocky Mountain 113, Gotham 79. 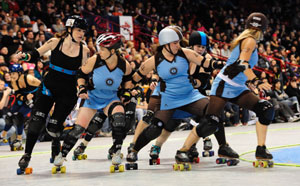 With a dramatic five lead changes in the first period of Game 10, Philly gave Oly skaters a run for their money, but it wasn’t fast or strong enough to defeat the 2009 WFTDA Champs. The 21 jams in the first were split nearly evenly for lead jammer status, but Oly were better able to capitalize on that status, especially after Heffer’s nine-point jam towards the end of the period, and the fifth (and final) lead change for the game. Oly were able to continue to strengthen their lead as they kept Philly to five points in the last nine jams of the first period, closing things out with Oly 52, Philly 34. As Oly pivot Sassy dominated the front of the pack, holding Philly jammers back with aplomb, so too did Oly jammers dominate the track, despite Philly’s strong back wall. The Cosa Nostra Donnas captured lead jammer status 11 out of 17 jams in the second period. Philly jammer Elle Viento attempted a rally with a 15-point power jam as Oly jammer Tannibal Lector sat in the box, but it wasn’t enough to push Philly through the point gap. The game ended with Oly 106, Philly 81, and Oly will advance to face Rocky Mountain in the Championship bout.