Oly and Rocky Mountain Clinch Championship Spots, Will Compete for #1 in the West

Day 2 of the WFTDA 2010 West Region Tournament, Rollin' on the River, featured lots of great roller derby and yet another record-breaking jam.

The first game of the day was a consolation bout between #10 Sacred City Derby Girls and #5 Rat City Rollergirls, who lost to Jet City (#7) and Rose City (#4), respectively, on Day 1. Sacred City chose not to play some of their top blockers and jammers, giving less experienced players a chance to play in the tournament. However, Rat City brought their A game, and were ahead by nearly 200 points going into the second half. In the end, Rat City defeated Sacred City with a final score of 367-32, in a bout that featured another tournament record breaker—the third this tournament season—with Primp Daddy of Rat City scoring a 39-point jam.

Game 8 was another consolation bout between #3 Denver Roller Dolls and #8 Duke City Derby. Denver lost in a surprise upset to B.ay A.rea D.erby Girls (#6) on Day 1, while Duke City lost to Tucson Roller Derby (#9). Duke City came out strong in the first couple of jams getting points up early, but it didn't take long for Denver to take over and control the pack. With a final score of 288-54, Denver takes the win and will go on to play Jet City Rollergirls (#7) later in the day. Duke City will face Sacred City in Game 13 on Sunday. 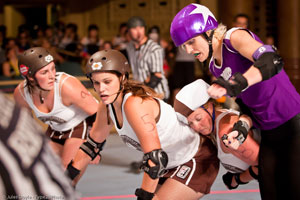 Game 9 between #1 seed Oly Rollers and #4 Rose City Rollers would determine the first team of the tournament to advance to the WFTDA Championships in November. An exciting game right from the start, Rose City really wanted this win, but Oly are masters at controlling the pack. However, with Rose City's deafening fan base behind her, Sully Skullkicker is able to score a 29-point jam, rumored to be the most points scored against Oly in a single a jam. Rose City also took the lead at one point and held it for two jams before Oly took it back. The score was still tight at halftime, with Oly ahead by just 13 points. The second half was extremely competitive with a close score for the first 15 minutes before Oly jumped ahead with a 50 point lead. At the end of a very exciting bout, Oly takes it with a more modest victory over Rose City at a final score of 148-109. Oly clinches a spot at the Championship tournament in November, and will defend their title as the #1 team in WFTDA's West Region on Sunday.

In Game 10 we saw #6 B.ay A.rea D.erby Girls take on #2 Rocky Mountain Rollergirls after defeating #3 Denver on Day 1. While Bay Area continued to give it their all and maintain a relatively close score during the first half, Rocky Mountain proved too much for them and took the win at 142-44. Bay Area will face Rose City in Game 16 to see who will take the third spot at Championships, while Rocky Mountain clinches the second spot and will take on Oly in what's sure to be an epic battle for WFTDA West Region Champion in Game 17.

Game 12 between Denver (#3) and Jet City Rollergirls (#7) started out close, but as both teams demonstrated their mastery of the slow game, Denver proved to have the better pack control. Denver wins it with a final score of 267-66.

Get more information about the tournament and watch live at http://rollinontheriver.net.