Day 3 of the WFTDA 2010 West Region Tournament, Rollin' on the River, provided plenty of excitement and a new WFTDA Western Champion.

In the first bout of the day, Duke City Derby (#8) went up against Sacred City Derby Girls (#10) to determine 9th and 10th place in WFTDA's West Region. Sacred City took the lead early, and came out victorious 198-72. Sacred City will advance one spot in the West Region at 9th place going into the 2011 season, while Duke City will drop two spots to 10th.

Jet City Rollergirls defended their current spot in the Western rankings, #7, against Tucson Roller Derby (#9) in Game 14. Tucson held the lead for most of the first half before Jet City pulled ahead and kept the lead heading into halftime. Jet City extended their lead in the second half, and took the win with a score of 149-95. Jet City will keep their #7 spot in the West, while Tucson advances one spot to #8.

Game 15 provided an exciting bout as #5 Rat City Rollergirls defended their current ranking in the WFTDA West against #3 Denver Roller Dolls, who would slip in the rankings regardless of the outcome. Denver took the lead early, but Rat City came out ahead going into the second half. The lead was swapped again in a close second half, but Rat City pulled out the win with a final score of 136-127. Rat City will maintain their current ranking of 5th place, while Denver drops to 6th.

Game 16 between #6 B.ay A.rea D.erby Girls and #4 Rose City Rollers would decide which team would advance to the WFTDA 2010 Championships in November, with Oly Rollers and Rocky Mountain Rollergirls. Bay Area comes out victorious after a close bout, with a final score of 133-102. Bay Area will head to Chicago in November for Uproar on the Lakeshore to compete for #1 in the WFTDA. 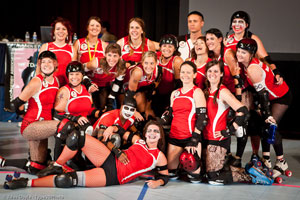 In the final bout of the tournament, #1 seed Oly Rollers defended their spot against #2 Rocky Mountain Rollergirls in what was arguably the most exciting bout of the entire tournament. Oly kept the score close for a while but in the end Rocky Mountain continued their domination of the WFTDA West Region by giving Oly their first defeat since joining the WFTDA and ending their 22-game winning streak, and taking their spot as the #1 team in the West, with a final score of 127-86. Both leagues will advance to the WFTDA Championship Tournament in November.

WFTDA's 2010 regional playoffs will conclude next week as the top 10 teams of the South Central Region compete at Amber Waves of Pain in Lincoln, NE, hosted by No Coast Derby Girls. Get all the information you need at amberwavesofpain.com.