Baltimore, Maryland’s Charm City Roller Girls (Seed #5) and Des Moines, Iowa’s Team United Roller Derby (Seed #6) met for the first time in Game 14 of the 2015 International WFTDA Division 1 Playoffs in Tucson. After two losses and one win, both teams found themselves in the 7th Place game. Following many lead changes and jammer penalties, Team United finished the game strong to end the tournament in 7th Place. 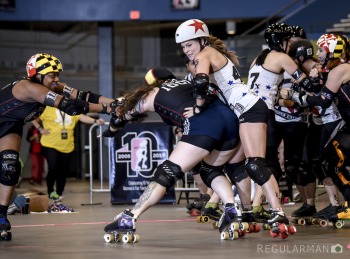 From the first jam it was obvious that this would be a close game. Charm City often started with a braced wall behind Team United’s similar braced wall. Lead jammer status usually went to the jammer that was more successful at breaking up those dynamic walls. In the first jam, Sunami earned lead jammer status for Team United by pushing Charm City’s wall apart towards the front of the engagement zone. As Team United’s wall held back Holly Gohardly Sunami scored the first seven points of the game. When Team United’s jammer was sent to the penalty box in the sixth jam, Charm City took a 32 point lead of 47-15, the largest point differential of the entire game.

In the following jams, Team United was able to take advantage of three penalties on Charm City’s jammers. Je NE Sais Quoi followed effective offensive maneuvers from her teammates to significantly cut down Charm City’s lead with an 18 point jam. Dottie Deathwish began the next jam in the box, but still earned lead jammer status for Charm City. She hopped through the outside lane for four points, but Team United’s Sunami quickly snuck through the pack for three points. With 15 minutes left in the first half, Team United took a four-point lead of 55-51 after Lolo Gunz scored 10 points. They held the lead for the rest of the half. Strong defense led by AJ 2PR3TI and Synyster Skates prevented Charm City’s jammers from easily getting through the pack while Team United grew their lead to over 20 points. At halftime the score was 83-103.

Charm City quickly caught back up after jammer Niki Cash drew a cutting penalty on the other jammer at the beginning of the second jam of the second half. After Lolo Gunz returned to the track she was unable to get past the wall of Cherrylicious, Scariett Tubman, Hittsburgh, and Free Radical, even when Niki Cash was sent to the box for a cutting penalty. Before she committed a penalty Niki Cash scored 15 points to bring the score to 102-107. Charm City carried this momentum and took a seven-point lead two jams later with a score of 116-109. They maintained a single digit lead for the next seven jams. 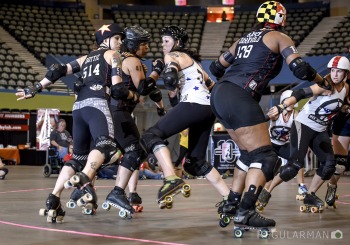 With 13 minutes left to play, both teams built braced walls near the pivot line to start the 31st jam. Neither jammer had much luck pushing through the walls until Je NE Sais Quoi earned lead jammer status with 54 seconds left in the jam. She had enough time to score eight points and tie the game at 136. Both jammers scored two quick points in the following jam to keep a tie score of 138. Dottie Deathwish broke the tie in Charm City’s favor with two more points, and Niki Cash added 10 points in the next jam. Charm City held the lead at 150-138 with nine minutes left on the clock. Team United quickly responded with 13 points to take a one point lead, but again Niki Cash was able to take advantage of a power jam for 11 points. This left the score at 161-151 in favor of Charm City.

In the next three jams Team United earned lead jammer status, as well as the lead. While Team United’s blockers Lolli Pop Ya, Vyolent GriMm, Snot Face, and Sunami recycled and held back Dottie Deathwish and, after a star pass, Free Radical, Je NE Sais Quoi caused the final lead change of the game with a 19 point jam. Vyolent Grimm switched from blocking to jamming to add five more points to Team United’s lead of 161-175 in the next jam. In what could have been the final jam of the game, Je NE Sais Quoi earned lead but Dottie Deathwish was slightly in ahead of her while chasing the pack. Team United managed to drain some time off the clock but called the jam off with 11 seconds still left. Charm City immediately used their last timeout and created one more chance to win.

Team United held a 14-point lead going into the final jam of the game. Niki Cash continued a strong second half by earning her 7th lead jammer status for Charm City. After being hit out of bounds on her scoring pass, Niki Cash came back in bounds in front of Lolli Pop Ya, who quickly sprinted backwards to pull a cutting penalty. Team United’s second highest scoring jammer Sunami accepted a star pass from their highest scoring jammer Je NE Sais Quoi and carefully added 16 points to make the final score 165-191.