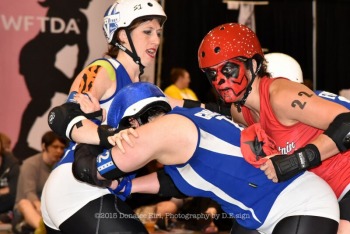 VRDL opened strong, with Christy Demons prancing like a colt into lead jammer and drawing first blood with 9 points. Fans got a glimpse of the bout’s pattern in jam 2, with jammers from both teams held by formidable, agile formations until the second turn, when VRDL’s Giles broke through after a botched star pass by Phantom Menace sent her to the box, allowing VRDL an additional 10 points. Rocky scored their first significant points in jam 6, with Sharon Tacos putting 5 on the board, though closely matched by IvyK’nivey’s 4 for VRDL, despite her two trips to the box, bringing the score to 45-7.

Throughout the bout, Rocky employed star passes with varying degrees of success in an uphill battle to score. On the outside, VRDL’s strategy seems simple enough but has so far been nearly impossible for any team in their bracket to combat: form an extremely fluid tripod that can morph into a four-person wheel and back in an instant, and tirelessly keep variations of this shape. VRDL does not bridge backwards, stringing jammers back for tens of yards the way Rocky often does so successfully. VRDL stays together and holds on tight, skating forwards and back in a pack when mobility is required and appearing to collapse into each other for support under pressure. VRDL jammers appeared to float through Rocky Mountain’s pack with a keen eye, aptly calling off the jam just in time to deny points to their opponent, while burning up every available second.

Rocky is no stranger to fluid formations either. Jams frequently started and ended with scrums more reminiscent of rugby than derby, with all the chaos in between. In Jam 12, both jammers were held for almost a minute before Rocky’s Sharon Tacos broke through as VRDL’s IvyK’Knivey went to the box. A powerful hit to the outside by Screw Barrymore ended Taco’s 13 point run. 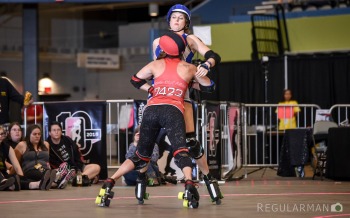 Rocky regrouped in the second half, finally bringing themselves up to the century mark in jam 29 with solid formations that held VRDL’s IvyK’Nivey, allowing Phantom Menace to score 14 points. Despite the early onslaught, Rocky Mountain couldn’t break the VRDL formations, remaining scoreless in seven jams, while Christy Demons would continue her push to a game high total of 119 points. Rocky’s Assaultin’ Pepa took the fight to the VRDL jammers in the final minutes of the game, forcing call offs of three scoring runs with skull rattling force.

As Tui Lyon of VRDL stated: “Rocky Mountain brought some really high-energy offense and big hits. Our key was being able to focus on our game, our energy, and pull it back to the way we wanna play.” And so they did, final score 289 to 116 sending VRDL to battle B.ay A.rea D.erby Girls for first place in Game 17, at 6 pm MST Sunday.

Rocky Mountain will play the Arch Rival Rollergirls for 3rd Place and the final slot at WFTDA Championships at 4 pm MST Sunday.