An unfortunate bout of jammer penalties kept Mad Rollin’ Dolls (#9) from gaining a foothold against Terminal City Rollergirls (#7) in Game 15 of the 2015 International WFTDA Division 1 Playoffs in Tucson, Arizona. As a result, Terminal City jumped two seeding spots to secure #5 at the Playoffs, while Mad Rollin’ Dolls also improved their seeding to #7. 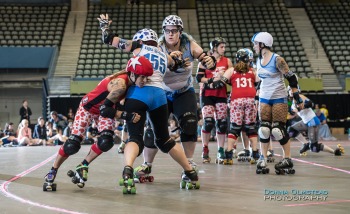 The first four jams were power jams for the Terminal City skaters, as Mouse, Magic Missile, Mack the Knife, and Sprout’n A Tail each went to the penalty box for various penalties. While Terminal City’s jammer Ann O’War also got a penalty during the second jam, the damage was done, as Terminal City took an early and extensive lead, 60-17, after the sixth jam. When not sitting in the penalty box—Mad Rollin’ Dolls accrued eight jammer penalties in the first half—the jammers in blue had a tough time getting around Terminal City blockers Griffith, Green Machine, Eve Hallows, and BruiseBerry Pie. Terminal’s blockers used effective recycling to force track cut after track cut.

Mad Rollin’ Dolls had a short string of success, scoring 19 points in four jams, with Magic Missile as the strongest jammer for the Dairyland Dolls in the period. Even though the penalty time for each was relatively similar—22 for Terminal and 24 for Mad Rollin’ Dolls—the scoreboard at the half was lopsided, and Terminal City skated into the locker room with a definite lead: 133-41. 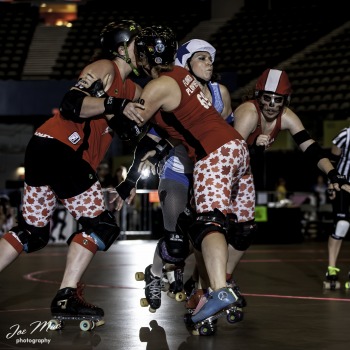 The point deficit created in the first period was too grand for the Dairyland Dolls, and the Terminal City skaters continued to skate toward the win in the second period. Jammer penalties continued to be a problem for both teams, but Terminal City was able to capitalize more effectively, scoring more than double the points during power jams than Mad Rollin’. With just over 11:00 left in the game, Terminal City captain Griffith fouled out, and though many other skaters for both teams sat at six penalties, no other skaters left the track.

In the end, the teams both had just over 50 penalties and 25 total jammer penalties. The game ended the same way it began, with a jammer penalty from Mad Rollin’, which sealed the win and the jump in seeding for Terminal City. Terminal City secured #5 at the tournament, up from #7, and Mad Rollin’ Dolls locked in #6, up from #9.