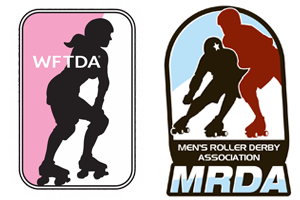 This agreement will foster additional collaboration between the two roller derby governing bodies in the areas of rules development, safety guidelines, officials certification, tournament dates and other games-related systems. The associations have committed to sharing resources, reducing duplicative efforts, and aligning organizational systems when possible.

The organizations already have an existing agreement in the area of rules. MRDA member leagues have always skated under the Rules of Flat Track Roller Derby, developed by the WFTDA. In 2013, the WFTDA added a MRDA representative to its Rules Committee and began producing an MRDA-branded version of the rules. In addition, the WFTDA’s insurance program began enrolling and insuring male skaters in 2012.

“The WFTDA has had a very positive relationship with the MRDA since it was formed, and our organizations share very similar missions and values,” said WFTDA Executive Director Juliana Gonzales. “We believe this agreement will further the efforts of both organizations to foster and develop flat track roller derby around the world.”

"Since its inception, the MRDA has acknowledged that we are building on a solid foundation, which was established by the women and men of the WFTDA, who were the driving force behind the resurgence of our sport,” said MRDA President Graham Espe. “Collaboration on all the key points of this agreement will lessen barriers so that we can all work together toward common goals, while still allowing both the MRDA and WFTDA to represent the individual interests of their respective memberships. We are very excited for what the future holds."

During the period of the initial one-year agreement, the organizations have also committed to examine the best ways for extending membership to leagues that have both a men’s and women’s team under the same business structure.