After celebrating a year of broadcasting through its successful and engaging online streaming website, WFTDA.tv, the Women’s Flat Track Derby Association is excited to present the first broadcast of the 2013 online viewing season: Philly Roller Girls' 2013 East Coast Derby Extravaganza!

The WFTDA is thrilled to again to share exciting sanctioned play, live on two simultaneous tracks (track 2 and track 3), only on WFTDA.tv. Live viewing of the 2013 East Coast Derby Extravaganza will feature more than 23 Division 1 and Division 2 bouts for viewing free of charge. Produced by Blaze Streaming Media for WFTDA.tv, the 2013 ECDX will bring die-hard fans and new audiences nonstop action to kick off the 2013 broadcast season!

Building off of the recent success of the new-for-2013 Livestream.com-based initiative, “WFTDA.tv Presents," ECDX's broadcast will be the formal kickoff of WFTDA-produced events for the remainder of the viewing season. 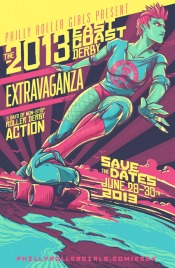 The WFTDA.tv Presents project offers member leagues the opportunity to produce and distribute their own content under the WFTDA banner, and receive promotional and technical support from the organization. These events are produced by WFTDA leagues, and distributed and promoted via WFTDA.tv’s Livestream platform free of charge.

New for 2013, are the WFTDA's Division 2 tournaments! WFTDA.tv will be there, heading to the heartland in late August 2013 for two fast-paced Division 2 Playoffs events. With the exciting addition of these tournaments, the WFTDA is looking to expand its season of coverage to help present more thrilling, competitive play via broadcast. WFTDA.tv will offer D2 viewers the option to help support these broadcasts through member and viewer donations of any level, with coupons and discount codes to thank generous supporters.

“We’ll be providing quality live, event coverage for D2 tournaments to viewers and encouraging fans to contribute to help defray our production costs, at whatever level they feel comfortable, ”WFTDA Head of Broadcast Operations Erica Vanstone said. “We recognize that skaters, support staff, and fans work hard for their dollar and for our community, and we're hoping they come on that journey with us--helping to build the Division 2 tournaments its video coverage from the ground up.”

2013 Division 1 Playoffs and Championship tournaments—four Playoffs followed by the Championship tournament—from September to November, will again be available via pay-per-view. The Playoffs pay-per-view costs will remain $12 for each tournament weekend, and Championships will be $20 for the weekend. WFTDA.tv will also offer a free audio boutcast for all pay-per-view bouts and free on-demand archives following the events. All-inclusive viewing packages for all Division 1 events will be available for $50. Proceeds from WFTDA.tv will continue to be reinvested into the organization's programming and will help support initiatives that strengthen the WFTDA’s common goals, always with the promotion and development of the sport in mind.