Texas and Nashville Join Kansas City in Chicago for Championships

The final day of Amber Waves of Pain opened with a Tennessee battle for ninth place between #9 Hard Knox Roller Girls and #10 Memphis Roller Derby. The first jam of the bout saw both jammers in the penalty box for major penalties, and the Memphis jammer, Lil’ Cinner returned to the penalty box just before the last whistle of the first jam. Hard Knox kept Memphis back for the entirety of the first period, though they were able to gain some momentum in the last jam of the period with an unanswered 15-point jam. They entered the half with 63 points to Hard Knox’s 77. Despite starting the second period with a lead changing 19-point jam, Memphis wasn’t able to hold back the Hard Knox jammers. Hard Knox ended the bout with 165 to Memphis’ 124. For the ninth-tenth place bout, the current rankings held true: Hard Knox clutched ninth, and Memphis held stationary in tenth. 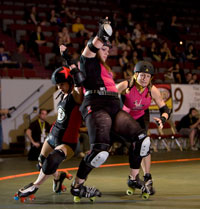 For a fifth time this season, #4 Dallas Derby Devils took on #7 Houston Roller Derby, but Bout 14 was largely a repeat of Dallas’ bout against No Coast on Day 2, as far as scoreless jams were concerned. Dallas was held scoreless for 15 jams in the first period, and after the loss of two of their dedicated jammers, Hot 4 Teacher in the twelfth jam and Roxy La Roo in the twentieth, they had a tough time setting themselves up for a comeback in the second. Houston’s strong pack control helped them maintain the lead for the entire bout. In the first jam of the second half, there was another jammer/penalty box switch-out as both Mistilla and Anita Riot earned majors. Jammers Roxy La Roo and Hot 4 Teacher reappeared later in the second period, but to no avail. While Hot 4 Teacher broke the pack before Houston jammer Mistilla in the thirteenth jam, she was unable to get lead for a minor cut. Mistilla used the lead jammer status to run down the clock, as Houston had solidified their lead by nearly 60-points. The bout ended with Houston scoring 150 to Dallas’ 69. Dallas fell from #4 to #8, and Houston maintained their position at #7.

For seven jams in Bout 15, #8 No Coast Derby Girls was held scoreless against #6 Tampa Bay Derby Darlins, but it wasn’t enough to keep No Coast at bay. No Coast jammer Anna Wrexx-It went down with an injury early in the period, but came back later to gain lead jammer status and score 13 points on a power jam, leading the No Coast rally, followed two jams later by Princess Lay-Ya-Flat’s 13-point jam to Flirtin W Disaster’s 12 points. The period ended in No Coast’s favor, with a 17 point differential: 51-34. Tampa was able to close the gap to 11 points during the second jam of the period with Sixgun Susie’s 8-point jam following on the heels of Little A’s period-opening nine point jam. Deep into the half, however, Tampa’s blocker Lunch Lady was ejected from the bout for accumulating too many trips to the box. In a last effort, the Tantrums called a time out with 20 seconds left on the period clock to squeeze in one more jam. While Sixgun was able to get lead jammer, it wasn’t enough to take the game. No Coast knocked Tampa off their one-legged perch, winning the bout 148-123. Tampa maintained their #6 position, while No Coast advanced from #8 to #5.

From the first whistle of Bout 16, #2 Atlanta Rollergirls tried to catch the #5 Nashville Rollergirls, though unsuccessfully. The skaters from Music City chipped away at points, and Nashville’s defense held Atlanta to four points for the first twelve jams. In the thirteenth jam, Wheelin’ Jennings capitalized on gaining lead jammer status and scored 10 points, snapping Atlanta's scoreless streak. While Nashville jammers owned lead jammer status for the bulk of the first period, Atlanta was able to get lead for the last four jams, ending the period on a rally, and closing the spread at Nashville 62, Atlanta 37. Due to Nashville’s strong defense, headed by pivot Four-Leaf Roller, Atlanta wasn’t able to take advantage of the momentum they gained at the end of the first. With the exception of Wheelin’ Jennings’ impressive 29 points in the ninth jam, Atlanta was left largely scoreless for the bulk of the period, scoring only six more points during three other jams. The final score was Nashville 132, Atlanta 73. Nashville unseated #2 Atlanta, and earned a trip to the WFTDA Championships in Chicago, taking the #3 spot in the South Central region; while Atlanta drops two spots to #4. 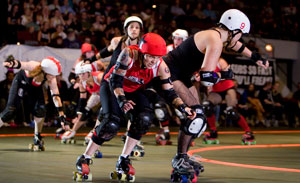 The first half of the South Central Championship bout between #1 Texas Rollergirls and #3 Kansas City Roller Warriors was a fast-paced nail-biter. The jammers traded lead status equally for the period, and the score shifted back and forth by two and three points. Kansas City gained lead jammer status in the last seven jams of the period, however, spreading the gap to 15 points and ending the half at Kansas City 64, Texas 49. The second half saw just as many big hits as the first, especially those dealt out by the blocking pair from Kansas City, Annie Maul and Bruz-Her; the two played every jam of the second half. Blocking for the Texecutioners, Curvette was ejected from the bout for a low block against KCRW’s jammer Kelley Young. There was some serious confusion in the penalty box during the seventeenth jam, when neither DeMentia for KC nor Olivia Shootin’ John for Texas knew on whom the track cut major was called. After not serving sufficient time in the box, Oliva was sent back to the box for two minutes in the next jam. During Kansas City’s power jam, Kelley Young scored 29 points, sealing the fate of the Texecutioners. The final score was 157-127. Kansas City takes the #1 spot in the South Central region. Texas will join them at the WFTDA Championship tournament, Uproar on the Lakeshore in November.