Co-captain of the Rocky Mountain Rollegirls, Frida Beater helped her team, 5280 Fight Club, take the number two spot at the 2009 WFTDA Western Playoffs, securing a place in the 2009 WFTDA Championships for the first time in the league's long history, and eventually placing 4th in the nation. 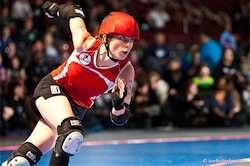 What is your (roller derby) position of choice?
Jammer and Pivot

Do you have a pre-bout ritual?
I eat a salad, sweet potato, and chicken. I also drink Bolthouse "Green Goodness" juice and lots of water.

What are some of your best/favorite moments in roller derby?
Winning the semi-final of the 2009 Western Regionals.

Who are your roller derby heroes?

Do you have a motivational quote?
"A ship in harbor is safe -- but that is not what ships are built for." -John Shedd

What goes through your brain as you lace up your skates?
I do a lot of visualization and try to get into the zone.

Do you have a theme song?
Sometimes I turn Fergalicious into "Fridalicious" at after parties.

Do you have a signature move?
I am really good at "swooping" people to the inside of the track. I have also been known to do silly things to other jammers on the jam line to "liven things up a little bit" when I'm jamming.

What advice would you give to someone just starting out in roller derby?
Dooo it! Derby is a kick in the pants.

Any advice for aspiring jammers?
Jamming is truly 85% mental. I don't care how athletic or agile someone is, if she does not have what I call "the jammer mentality," she will never be a good jammer. I could write a paper about the jammer mentality, but in sum, it is about a series of mental resets and lack of fear.

Anyone you'd like to take the opportunity to thank?
Oooh, of course! To the Rocky Mountain Rollergirls for being a very classy league with minimal drama and a lot of really great people. To my co-captain of the 5280 Fight Club, Catholic Cruel Girl (Cruelie), who has worked so so hard to get our team to where it is today. To all of the people who have supported and believed in RMRG through all of our ups and downs.

What are some of your greatest roller derby accomplishments?
Helping lead RMRG to 2nd in the West and 4th in the nation last year pretty much tops everything else. 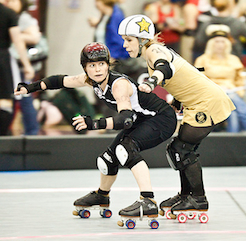 Can you tell your fans a little more about what it was like to score 100 points in one bout? When was that? And can you share any memorable details from that bout?
I think it was against Houston at the 2008 Western Playoffs. Back in the day, Fight Club pretty much had a two-jammer rotation: She Who Cannot be Named and me. People always thought it was crazy that we could skate that much, but we were/are both in great shape. She Who is an animal—she never gets tired. I trained like a crazy woman in 2008 because I knew how much my team depended on me to be in tip-top shape. That, and I got married that summer and I wanted to look good in my wedding dress. :-) Now we are lucky to have several phenomenal jammers so the pressure is off and I actually get to block sometimes (which I love).

You've got a lot of responsibility within Rocky Mountain Rollergirls being one of the captains of the travel team (5280 Fight Club), head of the training committee, and head of recruitment. How are you able to balance everything? Do you have any challenges in finding the proper balance between your derby life responsibilities and your real life responsibilities?
I recently gave up Recruitment because it was just too much and I was starting to burn out. Being the co-captain of our travel team and head of training is a lot, but I love both. I geek out thinking about strategy and dissecting complicated issues on the track into easily digestible parts that make sense to all levels of skaters. And if you'd ask people in my real life, they would likely agree that derby takes up a lopsided amount of my time and energy, but I LOVE it, so they deal.

How did it feel to play against the Denver Roller Dolls in the semi-finals of Western playoffs and then again at the WFTDA championship tournament? What was going through your head while you were bouting against them?
Playing against DRD at Western Regional Playoffs was a dream come true. We wanted to play—and win—that game more than I could ever explain in words because it was so emotional. We put every ounce of our hearts into that game.

When we played them again at 2009 Nationals, the build up was no longer there, emotions were much different, and we were so proud of ourselves for getting to that point in the tournament that I don't think we were mentally prepared. A suspension in the previous game and several injuries really took a toll on the team psyche. I blame myself for not rallying the troops like I should have. I'm not taking anything away from DRD. They played a great game and they are a great team. They deserved to win that game.

The interesting thing that happened during that game was when Cruelie got hurt and carted off on a backboard. I think something shifted for all of us. The girls on the track for both teams were talking, laughing, and eventually hugging. I was in the penalty box with Jessica Reutlinger (with whom I had not a very good relationship off the track) and we started hugging, too. It was too weird for words, but the mood changed and tensions diminished. Then, at the after party, we continued to develop friendships that have carried over today. Granted, we still have a healthy cross-town rivalry, but it's much less hostile these days.

What are your thoughts on Rocky Mountain making it back to the WFTDA Playoffs in 2010?
We are going to do everything in our power to be there and REALLY show up to play. When we are on our game and really connecting, it's frightening.