Annie Maul of 2007 WFTDA Champs, Kansas City Roller Warriors, is one of the best all-around players in roller derby—a double threat as a powerful blocker and a speedy jammer—and admired by skaters around the world. Take some time to learn how truly inspirational Annie Maul is to the entire derby community. 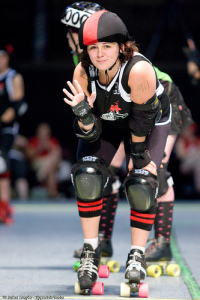 What is your (roller derby) position of choice?
Anything but outside blocker. The inside line is my favorite place to be and I tend to gravitate there.

Do you have a pre-bout ritual?
I eat a healthy breakfast, a light lunch, and then snack the rest of the day (I like to feel light when I skate). I get to the venue early and skate for about 30 minutes just to get my muscles loose and make sure my skates feel good. I drink half of a '5-hour Energy' 30 minutes before I play.

Also, I've been hosting the "Annie Maul Show" before games. Usually, it's just me sitting on one of our couches interviewing whoever happens by. I tend to keep the conversation on the ridiculous side of life to get out some nerves and make people laugh. Some of my regular co-hosts are Bruz-Her and Jessika Rabid. We just started video taping it, and it may someday make it to YouTube, but I’m not making any promises. You should probably just to try to make a live show sometime. Our next game is in Kansas City against Northwest Arkansas Roller Derby on June 12.

What are some of your best/favorite moments in roller derby?
After we won the 2007 WFTDA National Championship, I was skating back to the locker room and Deadlock Doe from Tucson Roller Derby, who seven months prior continuously sent me to the floor, told me I was a badass. That was awesome.

Do you have a motivational quote?
I try to give 100+ percent in every practice and every game so I think of this quote from Wayne Gretzky when I’m considering slacking off, “the highest compliment that you can pay me is to say that I work hard every day, that I never dog it.”

What goes through your brain as you lace up your skates?
I'm actually thinking about nothing. That might sound nuts, but it's the time where I just focus on getting my equipment on and letting my mind wander.

Do you have a theme song?
“Eye of the Tiger” by Survivor

Do you have a signature move?
I don't have a signature move (that I know about), but I quite enjoy hitting opposing players into opposing players. Usually this happens when a jammer is attempting to hide behind her blocker on the outside curve. I've been able to hit the blocker into the jammer on more than one occasion, and it is always great fun. I've also been able to hit a blocker into another blocker successfully destroying their wall with my move. In Kansas City we call that a two-for-one! 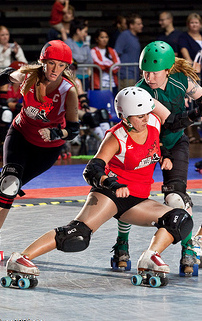 What advice would you give to someone just starting out in roller derby?
Roller derby is a 90 percent mental game. If you skate up to your opponent and think they are going to beat you, they are definitely going to beat you. You should have respect for your opponents but always go into every jam knowing everyone has a weakness no matter who they are or the things they have achieved. Go find your opponent's weakness! Don't let yourself be intimated by anyone (even if you should be).

Anyone you'd like to take the opportunity to thank?
I would like to thank my good friend Oucho Marx who had this crazy idea that we should check out this thing called roller derby. Oh, and I would also like to thank Coach Ice for teaching me to skate.

You're hands-down one of the best all-around players in the sport of roller derby—a double threat as a blocker and jammer—and so many skaters admire you. How does it feel to have derby players all around the the world with serious "derby crushes" on you?
This question is hard to answer. For one, it's weird to think there are skaters with "derby crushes" on me because I consider all derby players to be my peers regardless of their skill or ability level. And two, I'm just not that cool and not worthy of crushing on. I'm a pretty big dork. But if you guys want to be friends, I like good food, swimming, riding bikes, Belgium beer, summer, Gogol Bordello, nude body suits, and skating. If you like those things too, let's hang out!

You've successfully been competing nationally with roller derby for four years. Can you tell us a little more about how it feels to watch the sport of roller derby continue to evolve year after year?
Freaking exciting! I don’t know if you know this or not, but I’m obsessed with this sport. I love every aspect of it: athletics, self-expression, camaraderie, can-do attitudes, sportswomanship, aggressiveness, etc. There have been rule changes and there are different types of game play like the fast game versus the slow game. While I like some trends more than others, it’s good that we are progressing and constantly thinking of ways to beat each other within the rule set.

What was it like to be one of the featured skaters in the seven-episode documentary series "Roller Warriors"? How much notoriety has it brought to the Kansas City Roller Warriors? Do you think that you now get more fans at home bouts than you did before the series aired?
I was living in the "Skate Cave" at the time with Princess Slay-ya and Jessika Rabid. We had just won the National Championship, and I think that's why they chose to follow us around. Overall it was a fun experience, but it was nerve-racking to watch the episodes thinking of the all the time they miked me up and the dumb things I say on a daily basis combined with the high possibility of one of those dumb comments making it onto the show. Luckily, all that they caught was me fiddling with the microphone with a terrible, confusing look on my face. That's in the bloopers section of the DVD in case you want to go have a good laugh.

From what I can tell, the series did not help our fan attendance. We are definitely known in Kansas City, probably from people watching the series and being out and about around town a lot. We get recognized from time to time, and people are always excited to meet us once they realize we are those “roller derby girls.”

For history's sake, KCRW was basically the second women's flat track roller derby league in existence. Can you tell us more about the early days of getting the sport together in Missouri, while looking to the Texas Rollergirls for advice, and some of the challenges that you faced as a skater on that travel team in the beginning?
I actually joined the league on September 11, 2005 (It’s unfortunately an easy anniversary to remember). I missed out on knowing how much the Texas Rollergirls helped our league in the beginning. Dirty Britches and Princess Anna Conda are Kansas City’s co-founders. I believe they conversed with the Texas ladies quite a bit in the beginning, but I never had direct contact because I was a peon back then. But it was widely known in our league that Texas Rollergirls were our big sisters in the roller derby world. 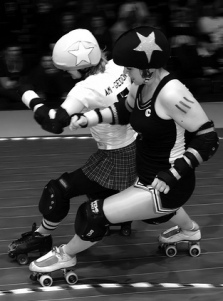 I became eligible to scrimmage just in time to practice against our All Star team about to attend the first national tournament, Dust Devil 2006, which I attended but did not skate in. Those of us who were playing against the travel team got our butts handed to us, but it made us better players for sure. In the spring of 2006, I tried out for the All Star team and made it my first time. My first inter-league game was against the Hustlers, a home team of the Texas Rollergirls, in the summer of 2006.

The challenge in the beginning was finding my place on the team and getting play time. I accepted that it was unlikely that I would play that much in the first year, so when I was rotated in regularly I counted my lucky stars that I was given that opportunity to play. My strategy was also to play where ever the coach and captains wanted me to play. That definitely helped get play time and helped me become a versatile player.

I have a strong opinion that when you first join a team you put your head down and do what you are told. You are unproven as a player in the beginning regardless of your potential. You have to prove yourself consistently before you can have an opinion about anything. Until then, shut up and skate!

For a while now, KCRW has been only one step behind Texas in the WFTDA rankings as #2 in the South Central Region. Do you have any personal plans to break this streak in 2010?
Well, we just lost a close game to the Atlanta Rollergirls, who are also in our region. I assume we will drop in the rankings after that. Even though we lost that game, I'm stoked about the Roller Warriors this year. That was only our second game of our inter-league season. And we have some amazing team chemistry building. We may not be the best right now, but I'm pumped to see where we'll go by the end of the year.

What would be the one thing that would make you hang up your skates and retire from the sport? Or, do you plan to keep skating forever? (WFTDA fans would love to see that!)
I plan to skate forever! That may make people laugh but I'm serious. I have a goal to see how long I can skate. I am aware that I play a full contact sport, and there is a chance I could sustain a major injury at any moment (I've already had a broken fibula and separated shoulder and lots of minor injuries here and there). A major injury could sideline me permanently. If I ever decide I want to hang up my skates though, I would love to become a coach. The only thing better than progressing yourself is helping others be their best!