Jackie Daniels was an original member of Grand Raggidy Roller Girls, who recently transferred to the Windy City Rollers. She's well known in the WFTDA community, having played with and against (and sometimes acting as a coach for) many leagues throughout the country. She was also one of the actual roller derby skaters featured in the movie Whip It. Her winning positive attitude and experience in roller derby are why we chose her as this month's featured skater. 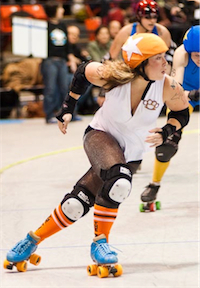 What is your (roller derby) position of choice? Not the bench or the box.

What is your skate gear of choice?
I still love the wide wheels, I just feel more powerful. So I am presently in a toss up between Radar 95 Devil Rays and 93 Speed Rays. I also have a custom cut 965 Riedell boot that has made a big impact for me, along with playing around with my Reactor plate mounting. I am currently enjoying the Swiss Kwik Nitride bearings.I have always worn the Pro-Tec Ace helmet, along with Triple Eight wrist and elbow pads and, I am a little uncommitted with knee pads.

Do you have a pre-bout ritual?
I don’t really have one! In the early years it was printing merch and pressing uniforms, UGH!! In GRRG, I think I was running around finishing details and often hosting opponent/visiting skaters at my home, so I was always more worried about everything else. I like to get a good burn out prior to the bout with some fast laps, I like to try to jam through my whole team on defense and bounce back and forth with some one-on-one hitting. I’ve been known for having an iron gut, so sometimes I eat healthy, sometimes I eat cheesecake and pizza. But, I always cut back on caffeine and alcohol, and drink tons of water the week leading up to a game. At this very moment, my Dad is in town before my game making me oatmeal and peanut butter toast.

What are some of your best/favorite moments in roller derby?
That’s a really tough question. There’s been SO many. WFTDA Eastern Regionals 2007 in Columbus, OH: GRRG played versus, (at the time #5 in WFTDA rankings) Gotham, who ended up #1. We were the first team to play them, losing by maybe about 160 points. GRRG played with such heart, with so little interleague experience, we were really bonded as a team, never gave up, and moved forward together after that. Gotham was really sweet to us and Philly gave us a lot of inspiration to keep doing the best we could with their cheers.

Who are your roller derby heroes?
I always love Teflon Donna, she was my first. I also just think Demanda Riot has got it going on (I love her in ways I should not). Sadistic Sadie is just hilarious and a great player and leader. Her on track attitude is something else when you know her well—she really has a great balance of incredible hard work and not taking anything too seriously.

What do you think about when you're lacing up your skates?
Here’s a three-second glance, “OMG, It’s another beautiful day I get to play roller derby, I really want to play our best, work together, work TOGETHER. Stay out of the penalty box. I can’t believe I have to go to the bathroom again! I hope no one is in there. Don’t worry about who the opponent blockers are, does not matter, you’ll just see the holes and get through. Block smart. I hate muffin top. Dang I love roller derby!”

Do you have a theme song?
I am a freak who rarely listens to music on my own, but, lately my work busts out with the Karate Kid, “You’re the Best Around” song once in a while, and I kinda like to think about me and my team getting fired up to that. Hahahaha!

Do you have a signature move?
I pretty much always hit everyone with my hips to their upper thigh, and usually to the inside. But my favorite move is anticipating hits and making people whiff, especially right off the line. I always laugh, and I love it when they laugh back. I crack up when it happens to me too. 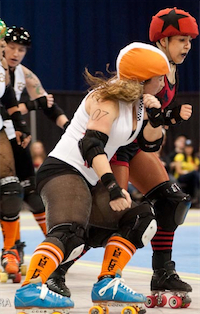 What advice would you give to someone just starting out in roller derby?
Learn the fundamentals. Always have a positive attitude while working hard and it will be the best and most challenging thing you’ve ever been a part of. It will be tough at times, but, that is when you grow as a person and athlete: when you are challenged and you push through. The growth this sport and culture can bring to your life is very precious, so do it up!

Anyone you'd like to take the opportunity to thank?
League-mates past and present, and everyone who has invited me to play or coach anywhere. I have played or coached in so many locations, on or with so many leagues/teams, I really feel grateful for all that learning, opportunity, and fun. That has brought so much to me in terms of skill and life happiness.

So tell your fans a little more about your transfer from Grand Raggidy to WCR...
I was researching new employment, and was looking to expand my search to other cities where my dream of tougher derby competition with a hope to attend WFTDA Nationals as a skater might be a little more possible. I had a few cities in mind, but with family in Chicago, and it being close to home, it happened pretty quick. I took a great job that came my way right away with a company in a related industry where I knew some of the people. I tried out for WCR, made the farm team, was drafted to the The Fury, tried out for the All Stars (made the first cut so far!) and am thrilled to be surrounded by the awesome, hard working and hilarious women of WCR. I am not sure what they think of my odd self yet, but it feels like a great fit to me! It’s a completely different experience than GRRG. It’s weird going from knowing everything and everyone since day one in GRRG, to just competing [as a skater]. It’s incredibly freeing. I personally really needed the break and change. I love getting more feedback as a player. I can’t believe how much I am learning and improving as a player and teammate in just eight weeks. I joined one committee, versus the several I was on for GRRG, but, as my male stunt double tells me, “like a magnet to the fridge.” I’ll likely be signing on to do more work behind the scenes before you know it!

How was it being one of the “real” skater stars in Whip It?
It was such a fun experience I feel very fortunate for. At first, I didn’t know who the skaters were and who were the actresses. I was mortified when I asked Kristen Wiig what league she was from! It was definitely fun getting to know the other skaters, trainers, meeting the cast and watching the whole crew work. It's really different to see it all for the behind the scenes. I kinda still feel a disconnect, like it didn't really happen, it's totally weird seeing it on screen.

It’s funny now to hear movie fans think I’m a "villain" for taking Ellen Page/Bliss out, cause it’s derby, and I am definitely not a mean person. A WCR skater’s daughter didn’t want her Mom to play against me in our January game. So funny!

A favorite moment of mine was at the LA Premiere, and Quentin Tarantino said to me, “We’ve met haven’t we?” And I responded, “Ah, no.” And he said, “I think we have.” And then I said, "Uh, I was in the movie.” And then he said, “No, that’s not it.” I didn’t say it, but I was pretty much like, yeah, I think I’d remember meeting Quentin Tarantino before. Maybe I should wear more clothes more often.

What are some of your greatest roller derby accomplishments?
They are kept as a collection of cards and notes, two Season Fan Favorite awards, three Season Hard Work Behind the Scenes awards, one Season BAMF award, and t-shirts from skaters all over who I have skated with or against, hung out with, or coached. This great bunch of thank you notes and opponent jerseys remind me of the best times of my life, why derby is so awesome, the amazing women, and why still paying off my credit card long after I can’t skate will have been so worth it. And, this honor right here feels really good too, thank you.