WFTDA's 2009 National Champions, Oly Rollers, came out of nowhere to sweep the Western Regional Tournament, and later claim the Hydra Trophy at the Declaration of Derby National Tournament. The Oly Rollers are relatively new to WFTDA, having joined in April of 2008, and were not even ranked at the beginning of 2009. Though it was not much of a surprise to anyone who faced the team (or just watched them play) during the regular season, the flat track roller derby world was stunned when Oly knocked out WFTDA 2008 champs, Gotham Girls Roller Derby, early in the national tournament, and later defeated 2006 champs, Texas Rollergirls, to take home the Hydra. WFTDA is excited about the level of competition this league has brought to the organization, and can't wait to see what else they have in store. Take a moment to learn a little more about this exciting upstart league. 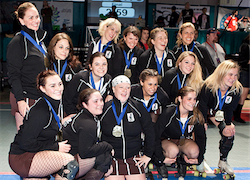 How does your season run?
Our season lasts from January to November.

Are you close to any other WFTDA leagues?
Rat City (Seattle) and Slaughter County (Bremerton) [as well as non-WFTDA, Dockyard Derby, in Tacoma] are all within 30 to 50 miles. There are also Rose City and Jet City that are about 100 miles away.

How many skaters/teams do you have?
We have three teams. The Cosa Nostra Donnas, is our A team. The Dropkick Donnas (formerly the Primadonnas) are a team of women who do not want to travel or play at a national WFTDA level. They have played well and beat a lot of other league's travel teams. The Bella Donnas are a "fresh meat" team.

Why do you have a "mafia theme" to all of your team names?
Our league split a couple of years ago, and the skaters who were left wanted to start fresh, but we did not want to change how we train or play. We wanted to do it our way. It was suggested that we call ourselves the "Cosa Nostra Donnas," because "cosa nostra" means "our thing" in Italian. The girls loved it because we do it "our way". So the mafia theme has carried over to all the teams.

How often do you practice?
We practice three days a week as a league, and have no seperate team practices.

What are some of the individual challenges of your city?
The biggest challenge in our city is the population. We are a small city of about 30,000 with four leagues within 40 miles.

What are your biggest training challenges?
Keeping everyone progressing at the same level. We work hard to get our new skaters at a high level as fast as possible. We keep moving forward and don't like to leave anyone behind.

Who are the best "behind the scenes" skaters who make your league run?
We try to keep everyone involved in the daily operation of the league. We don't have the numbers to delegate work. The skaters you see on the track also work equally as hard off skates.

Who are some of your stars on the track, and why?
We don't believe in star skaters, they all have roles in the game. In our system, we change how the game is played on a game to game basis. You may see our jammers accumulate 60 points in one game, but only gain 20 to 30 in the next. We also have three World and National Class speed skaters that we don't jam because their pack play is to too valuable to pull them out for jamming. That might change next year. We make sure that every skater has a role in the game and is ready for any situation. Without every skater working hard, the system does not work.

What kind of training/bouting facilities do you have?
We train on a hardwood floor.