Montreal Roller Derby became the first non-U.S. WFTDA member league in January of 2009 and have been making some recent derby waves in their 2010 East Region bouts. They entertained the roller derby world at WFTDA's 2009 Championships, Declaration of Derby, with their neon colored choreographed dance routine. Take a moment to learn more about this highly entertaining and fascinating Canadian league.

How does your season run?
We've been adjusting every year to find what works for us. Our home season starts off at the end of April with our annual Beast of the East tournament, and goes until the first week in August. This season, our travel teams had their first bouts mid-February and we'll be playing until Regionals. During our home season, the travel teams wind down for two months, because last season was a bit overwhelming. Technically it ends at some point, but most of us keep skating.

Are you close to any other WFTDA leagues?
Gotham Girls Roller Derby (New York, NY), Boston Derby Dames (Boston, MA), and Hammer City Roller Girls (Hammer City, Ontario, Canada), which are all about five hours away.

How many skaters/teams do you have?
We have about 60 skaters that make up three home teams and two travel teams.

How is your league structured (home teams, travel team, management)?
Montreal has three home teams (Contrabanditas, Filles Du Roi, and la Racaille), two travel teams (New Skids on the Block, and les Sexpos), and a rookie training team, Smash Squad. We have a board of directors, and a whole whack of committees.

Who is Montreal's biggest rival? And have you had any outstanding, memorable moments against them when you bouted?
Hammer City has always been a great rival of ours, especially with our home teams. It was really exciting when our travel team first beat them, because they had always beat our home teams beforehand. Otherwise, we tend to play leagues only once except for Dutchland and Boston. The Boston B-Party will be coming for the third time this season. I can't believe they have kept coming back after our fans threw beer cans at them the first time.

Do you have any sister leagues you'd like to give a shout out to?
This would also be Hammer City! We love them. I think we also have a great sisterly bond with all Canadian leagues, especially the ones that get out there and play a lot of interleague games. South of the border we've had a lot of great support over the years and have learned so much from leagues like Boston, Gotham, Charm City, Philly, and Texas. They either helped us get into WFTDA or helped us figure out how to actually play roller derby. We'd also like to give a shout out to the San Diego Derby Dolls as well. They are rad and live so very far away from us.

What are some of the individual challenges of your city?
We're in Canada, and the border sucks! Trash N Smash has been banned from America all season, apparently she is a threat to homeland security. Montreal is partly a French speaking city, so sometimes it can be tough appealing to the French community or media. We're also in that position where we are selling out our season games with about 1,000 people per game to, primarily, a walk-up Montreal hipster/weirdo crowd. If we were to find a bigger location in a less central location, we'd be at risk of becoming like the Montreal Expos and losing our crowd because people here don't like to leave the main hubs of the city.

Who are some of your favorite sponsors?
PABST!
Without them, we wouldn't be able to accomplish half of the things we've done.

What are your biggest training challenges?
This season we've had an excellent training squad. We've really organized ourselves, and it's refreshing to see our league members kicking so much ass this season.

Who are the best "behind the scenes" skaters who make your league run?
Jess Bandit, Trash N Smash, and Null Ptr Ref. There are a lot of key people in our league, but they have really dedicated their lives to MTLRD since the beginning. I think it's partly the OCD that makes them so efficient, and crazy about the league.

Who are some of your stars on the track, and why?
Iron Wench is one of our key jammers. She's one of the fastest skaters I have seen in roller derby! However, she wouldn't be able to get through the pack so easily if it weren't for our amazing blocking team. Every single one of them! They have made our job as jammers so much easier this season. Jess Bandit has become one our most consistent and smartest blockers. Our team wouldn't have been able to come so far without her leading the way she has, and she's really great at dumbing everything down for us. I'm also impressed every game with how Ewan Wotarmy manages to take out opposing players with her small 5'3 frame. I have seen jammers flip over her back.

What kind of training/bouting facilities do you have?
We practice at three different places, and we skate on wood and smooth concrete. I think the different surfaces have allowed us to be ready for any floor.

Montreal is rising fast on the national roller derby circuit, continuing an increasingly impressive winning streak (now at 9 games overall and 7 WFTDA-sanctioned bouts). You are currently ranked #24 in DNN's May 2010 Power Rankings, with recent victories over the WFTDA #6 ranked Carolina Roller Girls and #9 Dutchland in the East Region. What do you contribute your success to?
It starts off with Georgia Tush being a crazy person and booking a crazy interleague schedule. The team is also crazy for agreeing to play all these games.
We made a two year plan last year:

Our first season we played whoever we could for the learning experience. We lost almost every sanctioned bout last season, but learned something from every single game. This season, the teams we are playing are a bit more strategized. We booked bouts against teams that were much higher ranked than us like Charm City, Boston, and Carolina as a tough challenge and learning experience. We booked double and triple weekends to build our endurance, which we saw teams like Texas and Charm doing last season. We really wanted to do the super weekends to be prepared and ready for Regionals (hoping we'd get in). Finally, we booked games against teams that were closely ranked ahead of us in the East to secure that spot at Regionals.

Every goal that we have made thus far for our season, we have accomplished. We surprise ourselves on a regular basis. We're great losers, awkward winners, and continuously trying to better ourselves as a team. Fitness has also been key for us year.

It's more dificult to get in and out of Canada these days. Have you had any issues with getting teams scheduled to bout you now that everyone needs passports?
Yes!! Get your damn passports!!!! 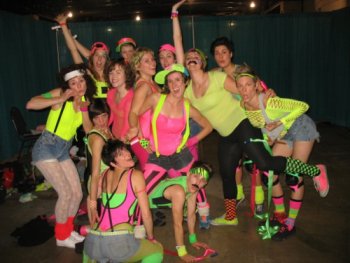 Whose idea was it to do the choreographed dance routine at the WFTDA Declaration of Derby Championships in 2009? Was that hard to put together? How much did you practice?
We had originally challenged Charm City to a dance off at ECE last year, sent via Justice Feelgood Marshall's t-shirt. We were inspired by their after party dance that circulated on YouTube. They weren't around Sunday night at ECE, so the challenge was Montreal vs Atlanta. There was also an incident at the pool where our gals busted into Beyonce's "Single Ladies" in front of the swimming audience. A few months later, Philly invited us to be one of the half time shows at 2009 Nationals. Wrath Poutine and No Holds Bard were the brains behind the routine. We practiced for a few weeks before Nationals, and even rented a small dance studio twice. Not gonna lie, we've incorporated jazzercize into our off skates training at times.

So, what's up with all that neon?
We had to get noticed somehow. We actually all had a tough time with our home teams trying to figure out names, uniforms, and team colors. We wanted the most ridiculous color combo that everyone would agree on. Somehow out of that discussion we came out with the color and our team name.

Do you have a special message to your fans?
Don't Stop Believin'!

Is there any other information that you would like to share with wftda.com? Upcoming plans for 2010, tournaments, road trips, etc?
Our travel team season is mostly over except for ECE June 25-27, 2010 where we will be playing Tampa and Dominion and then hopefully on to 2010 Regionals!!!