The Rose City Rollers are arguably one of the largest leagues in the WFTDA. Currently ranked 4th in the Western Region, these super heroines do a lot for the sport of roller derby. From the film documentary Brutal Beauty to the Jam! Roller Derby Comic Anthology; find out more about how these ladies manage to stay in the public eye and train over 200 skaters.

Are you close to any other WFTDA leagues?
Seattle's Rat City (xoxo—that means we heart them), Eugene's Emerald City, Bend's Lava City, and the Oly Rollers from Olympia.

How many skaters/teams do you have?
We have just over 200 skaters currently. There are our two travel teams: our A team, the “Wheels of Justice,” and the B team, “Axles of Annihilation.” We also have four home teams: the “Breakneck Betties,” “Guns N Rollers,” “Heartless Heathers,” and the “High Rollers.” On top of that, we have our recreational league the “Wreckers,” our junior league the “Rosebuds,” as well as our fresh meat program. Rose City has one of the largest leagues in regards to membership in the WFTDA. Portlanders love unique sports, we do a lot of marketing, and we have a facility that allows for lots of roller derby programs to bring people in.

How is your league structured (home teams, travel team, management)?
As far as the business, we are a 501c3 non-profit with a board and a bunch of committees with committee heads.

How are your recruitment and tryouts structured?
It's your normal publicized tryouts that humiliate people on skates, and then ushers them into a life transforming activity. Ladies can start in our recreational league (The Wreckers) and can choose to train for fun or in preparation for our Fresh Meat tryouts. From those tryouts we draft to keep the Fresh Meat pool at 30 skaters who then can be drafted into one of the four home teams quarterly. Then from home teams people are drafted to the travel B team (Axles of Annihilation) and from there to Wheels of Justice!

How many days a week do you practice?
All 7! We run 40+ practice hours weekly for all the different teams.

Who is Rose City's biggest rival? And have you had any outstanding, memorable moments against them when you bouted?
Rat City. We've had a long standing sisterly rivalry with them dating back to when they beat Texas and we never thought we'd be able to take them. Then we hosted a downgraded version of their All-Stars in Sept 2008 at our training facility, whooped 'em, and have been doing so ever since. The after parties are always sweet! We also had a real gnarly rivalry with B.ay A.rea D.erby Girls. They kept knocking us out for a spot at Nationals (including when we hosted Nationals in 2008), but then we finally beat them last year on their turf, just prior to Regionals—so super awesome! That was our swan song.

Do you have any sister leagues you'd like to give a shout out to?
Rat City fo sho!

What are the individual challenges of your city?
So much fun stuff to do! People have to decide between roller derby and tons of other stuff for 25-45-year-olds to do—it's like Wonderland here. We’ve looked into playing at the arena in the middle of our city but the cost is too prohibitive.

Who are some of your favorite sponsors?
Pabst, Rockstar, Fat Tire, The Orthopedic & Fracture Clinic (our docs), Get Fit Training.

What are your biggest training challenges?
Keeping girls healthy and un-injured. With so much training going on and such a large number of skaters, it feels like we're having major injuries all the time. We are also working on getting a standardized training program in place to get the new ladies whipped into shape more quickly.

Who are the best "behind the scenes" skaters who make your league run?
Draggin Ladies. She's our Event Director, Fresh Meat admin, and Art Director.

Who are some of your star on-track skaters and why?
Cadillac and Scratcher in the Eye, our Wheels captains. They are both phenomenal athletes and have fantastic attitudes. Cadillac is an athlete to the core—dedicated, passionate, and team focused—while Scratcher is a nontraditional athlete whose cross training has lead to her becoming an RCR MVP, for sure. She's also very involved in perpetuating the evolution of RCR as a nonprofit.

What kind of training/bouting facilities do you have?
A totally dope 12,000 sq ft Hangar on the property of an amusement park. On site is also Oaks Park Roller Rink where we do endurance on Sundays. They have the most amazing wood floor as it's where they host speed Regionals.

How long ago did you obtain your venue?
The Oaks Park rink manager, Beki, ushered us into being able to lease the Hangar that's on the Oaks property. For a year and a half we just practiced there and held all bouts at the Expo Center to 2,000+ crowds, but with the looming economic downturn, we had to recession-proof ourselves. I had to ask the Oaks CEO, Joe Norling (super sweet guy), if we could start having bouts at the Hangar. He gave us the green light and in 2009 we held our first combo Hangar/Expo season. The Hangar holds 600, has no overhead, and the fans love it. Pretty sweet set up with the seating much closer to the action. We wish we could expand it to hold 1,000, but for now it's great.

Rose City seems very progressive with promoting the sport of roller derby. How do you stay on the cutting edge of the sport?
Well, Rose City kind of lucked out by being financially able to hire an employee (Rocket Mean) dating back to 2007, so we've had a person at the helm that came with a Marketing degree and also helped form the WFTDA. So those two pieces culminated in RCR thinking "if it's good for derby in general, it's good for RCR."

The newest roller derby documentary, BRUTAL BEAUTY was just released to the masses in the spring of 2010. What was your experience with the creation of the documentary?
Chip Marbury (the director) approached Rocket Mean in the fall of 2008; right around the time he was finishing up a documentary called Rip City about skateboarding in Portland. He wanted to make his next project about roller derby. Like with all projects where an endeavor has the potential to suck up a bunch of our resources and exploit us, we guardedly started working with Chip. Once we saw that he was really taking his time to find the genuine story, it became a blessed partnership. He captured the soul of the players and the game in a way that had not yet made it way to the silver screen, and did so in a visually stunning way. Totally nailed it!

Rose City collaborated with WFTDA and Oni Press to create the Jam! Roller Derby Comic Anthology that just hit stands on June 23rd. Can you tell us more about your experience with putting all of this together?
Gosh it feels like a lifetime ago that we penned the deal (spring 2008). We started working with Oni on a collaboration to put out our own comic, as well as to facilitate the national anthology. They're total pros and really handled all the leg work. The final product looks awesome and will surely have a place on the coffee tables of tons of derby ladies!

Quite a few WFTDA leagues have Junior Roller Derby teams, and you have the Rosebuds. Tell us a little more about your experiences in working with girls ages 12-17 and playing the sport of roller derby. Would you recommend other leagues pursue creating and managing junior teams?
Junior derby is awesome. Every town has girls in high school that could benefit from the camaraderie and athletic training junior derby offers. It feels good to have a program that helps young ladies find themselves and grow as people. But man, add hormones to stinky derby gear and they are one rank group. If we could give one piece of advice to leagues starting junior derby, it would be to gather your volunteers (and look outside your league for people with youth programs experience) and build a plan for what you want to do and how you'll do it.

Do you have a special message to your fans?
Buy a ticket, homies.

What upcoming events should we look forward to RCR hosting?
RCR is hosting a totally sick boot camp weekend, Derby Daze, Aug 27-29, including tons of derby training by our Wheels of Justice, along with a couple bouts, ref training, and a marketing lunch where folks can feel free to ask questions. It will be tough, fun, inspiring, and generally radical! But we're only letting 100 ladies sign up, so if you want in, you need to jump on sign-ups ASAP! 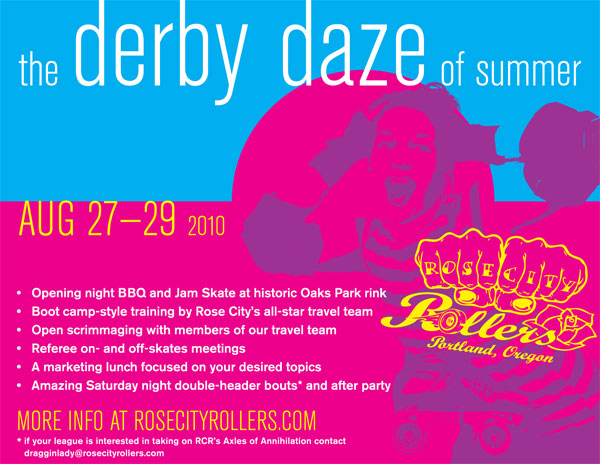