How do I get the most out of watching a derby bout live?

Courtesy of Three-Day Bender from the Boston Derby Dames
repost of blog: http://www.bostonderbydames.com/index.cfm?cdid=11449&pid=10224

Okay, you've been to one or two bouts, you've seen the rules demo, and you've watched skaters making a lot of left turns. But you don't quite get what's going on down on the track. We're here to fix that! Here are some suggestions for how to get more out of watching a roller derby bout, laid out in easy steps. Start at the top, and when you're ready, move on to the next thing. In the future, look for more in-depth articles on each of these points.

1) Enjoy the hitting. Let's admit it, the first time you go to a roller derby bout, you're looking for big hip-checks and skaters sprawling to the floor. That's okay! To rip off Yogi Berra, 50% of this sport is half-physical, so enjoy the big hits and the big falls.

2) Watch the jammers. They score the points, and they're the ones who get hit most often! They're also easy to spot because they're wearing a big star on their helmets. The blockers will mostly focus on them, so you should too.

3) Watch the pack even when the jammers aren't there. This is the equivalent of watching the action "off the ball" in most sports: how a basketball half-court offense sets up, or a football defensive scheme. Watch who's moving to the front and who's dropping back. Watch how the pack speeds up and slows down depending on where the jammers are. Watch for the refs to signal where the pack is when it starts to split, and how it reforms when that happens.

Gotten this far? Great. You're now a derby fan! Hopefully at this point you're hooked, and you've already bought tickets for the next bout. You want more? No worries, there's plenty more in store for you...

4) Watch the referees. A good referee is part of the action. Pack refs follow the pack and signal penalties. Jam refs follow the jammers and count points with a raised hand after each scoring pass. Watch for a five-point "grand slam," when a jammer passes all blockers and laps the opposing jammer. You can learn all the other penalty calls by reading the excellent PDF - WFTDA Referee Hand Signals here on WFTDA.com, which shows pictures of all the calls. Look for the difference between a skater being sent to the box for a major, versus being sent off for accumulating four minors. 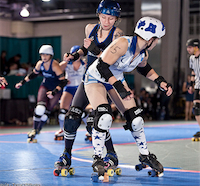 6) Watch the blockers who aren't in the pack. The "20 foot rule" is one of the little details that come into play a lot on the track. It's like the offside rule in soccer—hard to understand, but used strategically and an important part of understanding the game. When blockers get too far ahead of the pack because they're fighting off a jammer, look for the "out of play" warning (ref's right arm bends at the elbow with the hand straight up) and penalty (the hand comes down in a chopping motion), or listen for the call, "20 feet! Let her go!"

At this point you should be able to wow your friends with your knowledge of derby. You've already bought season tickets for next year. Wait, you still haven't had enough? Okay, you asked for it...

7) Read the official rules. You won't get everything the first time. Don't even try. You might actually try reading them backwards—start at the end and working your way forward. But at some point you just have to read the official wording in order to understand why the penalties are called like they are.

8) Try to understand the strategy. Why did the lead jammer call off that jam? How much time is left in the period? What's the score? Which jammers get ahead on speed, and which get ahead by letting their blockers do the work? Which blockers seem to rely on hard hits and which rely on positional blocking to stop opponents or clear a path for their own jammer? How do blockers work together to stop a jammer? How does a jammer get help from the blockers on her team? How quickly does a team shift from offense to defense depending on their jammer’s position—do certain skaters seem to always play one or the other?

9) Count jammer points. See if you can tally how many opposing skaters a jammer has passed legally. Don’t forget, they get points for any players in the penalty box as soon as they pass the first opponent on the track. You might not always get the same number as the jam ref, because you might not always see penalties (which result in points not being granted). But the first time you call a grand slam before the jam ref signals it, the look of awe from your friends will make it worthwhile.

Are you kidding me? If you want to get into even more nitty-gritty…

10) Come referee for your closest league. At this point you’ve got the essentials down pat, the rest is just learning to recognize the finer points and respond to them quickly. Hey, you'll get into every bout for free! (No, seriously. You just might love it.)

Prev: Is there an age requirement for roller derby?