Slow packs. Long jams. Grinding wheels. The much-anticipated championship game between Victorian Roller Derby League of Melbourne, Australia (#1) and B.ay A.rea D.erby Girls of San Francisco, California, (#2) did not disappoint. As the packs rolled slowly along the straightaways, the intensity and tenacity of the teams continued to mount. However, the momentum of Victorian’s undefeated 2015 season helped push their jammers through, tighten the notorious Victoria box defense, and secure their #1 seed and first-round bye at the 2015 International WFTDA Championships in St. Paul, Minnesota, Nov. 6-8. 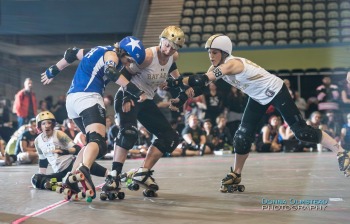 Drawing first points, VRDL sent out their can’t-lose jammer Christy Demons to the jammer line. Perhaps it was the frenzy of the auditorium or the high stakes of the game, but VRDL also bled three blockers to the box, giving B.A.D. the chance to gain lead status with jammer Skrappie, keeping the score tight in the opening two jams, 15-9. By the ninth jam, at the 16:40 mark in the period, B.A.D. executed a lead change, gaining a one-point advantage. The lead for the ladies in gold was short-lived, however, as the team went scoreless for the following three jams.

Though VRDL jammer Giles failed an apex jump in the twelfth jam, she managed to score 18 points against B.A.D. jammer Skrappie; these 18 points followed a similar jam from Christy Demons in the previous jam. The 36 points helped Victoria break away from Bay Area. Both teams struggled with blocker penalties, and VRDL blocker Tui Lyon, though exhibiting strong pack awareness and communication with jammers, had five penalties by the end of the period. Liza Machete and Murderin’ Monroe for B.A.D. led the blockers with hits and penalties as well, grabbing four each. At the half, B.A.D. trailed VRDL by 37 points at 55-92.

After skating a relatively clean jammer game in the first half, B.ay A.rea opened the second period with a forearm penalty from Frightmare. The penalty left the team without the opportunity to score, but did give veteran blockers Amanda Jamitinya, Demanda Riot, and Murderin Monroe a chance to play serious defense, holding Christy Demons to 10 points. That defense continued into the following jams and rattled VRDL jammer Giles enough that she committed three penalties across two consecutive jams. With the opposing jammer in the box for an extended amount of time, B.A.D. blockers could focus on offense, helping jammers Skrappie and Lulu Lockjaw score 16 points collectively.

With the period nearly half over, head referee Sir Osis called an official timeout to warn skaters about positional blocking with the head. Though unrelated, the official review came after three back-to-back jammer penalties from B.ay A.rea, and the time marked the middle of an eight jam scoreless run for the ladies from California. During that time, VRDL scored 40 unanswered points. That run gave the Australians a foothold that guaranteed their quarter-final birth at Championships, despite skating scoreless in the game’s final five jams. Of note, VRDL jammer Christy Demons scored 99 of Victorian’s 151 points.

Both teams maintain their tournament seeding and will skate at the 2015 International WFTDA Championships in November.